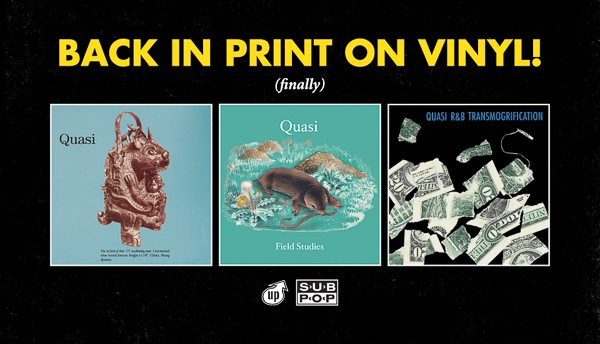 This repress also marks the first time that R&B Transmogrification is available as a stand-alone vinyl release (it was previously available as a bonus LP, packaged with the release of Featuring “Birds”).  All three titles will be available in the U.S. on May 27th through Up Records (via Sub Pop), and are now available for preorder at Sub Pop Mega Mart and independent retailers near you.

LP preorders for each release will be available on black vinyl, in addition to three limited-edition colors: R&B Transmogrification on light green; Featuring “Birds” on light blue; and Field Studies on white (while supplies last, so don’t sleep!).

Revisit each of these fantastic records (or listen for the first time maybe?) right now via YouTube:  R&B Transmogrification - Featuring “Birds” - Field Studies 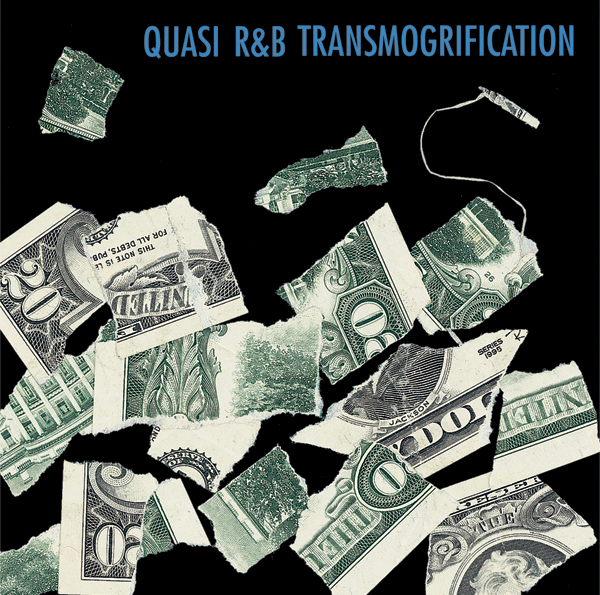 R&B TRANSMOGRIFICATION (MARCH 25TH, 1997)
Quasi’s (pronounced KWAH-zee) primary instrumentalist Sam Coomes played in the Donner Party before starting Motorgoat in 1992 with drummer Janet Weiss. After the dissolution of Motorgoat in 1993, Sam and Janet continued as Quasi, which grew from a side project that took in songs that didn’t fit under Motorgoat’s roof into a larger part of Sam and Janet’s lives, eventually resulting in Quasi’s 1995 debut, Early Recordings. Despite Sam joining Heatmiser and Janet taking over the drums for Sleater-Kinney, Sam and Janet continued to develop Quasi, eventually crafting enough songs for a new album.

On R&B Transmogrification Quasi comes further out of the Northwest woodwork with an album that rolls some of the most intense pop numbers up with the saddest lyrics you’ve ever heard. Recorded in a cold, Portland, OR basement during the winter of 1996, R&B Transmogrification serves as an almost exact representation of the duo’s amazing live sound.

With a heavy emphasis onfuzz piano and “kinetic” drumming, guitars chime in spare and harmonious throughout the songs, showing the soulful grace hidden behind a thin veil of cacophony. This all lays the foundation for lyrical explorations of the apparently inexhaustible themes of death and the failure of love. But never have the two morose subjects sounded so beautiful and harmless.

“Quasi fashion an exuberant noise in unique settings…The playing is intuitive, sonic, and playful; arrangements are incredibly distinct and imaginative.” - Your Flesh

“R&B Transmogrification is a fully realized nugget of indie rock, not just an indulgent side project.” - Seattle Times 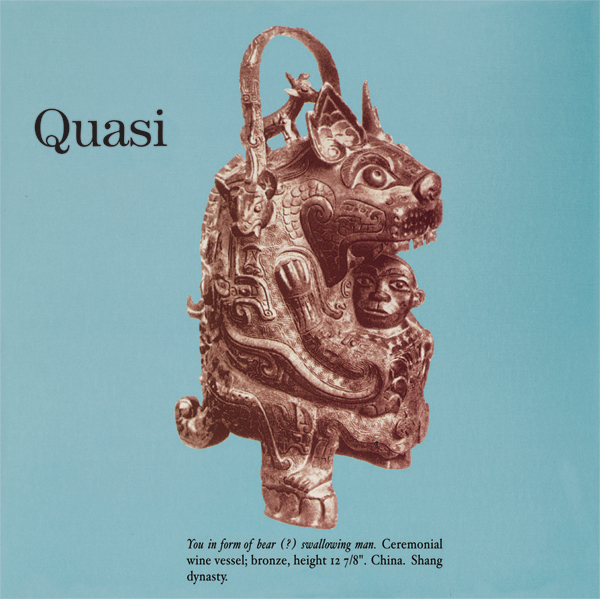 FEATURING “BIRDS” (APRIL 20TH, 1998)
On this, Quasi’s third album (their second for Up Records), Quasi’s transformation is possibly complete. They have succeeded in writing a perfect pop album while maintaining the tension and dramatic joy of their past releases. Sam Coomes (formerly of Heatmiser, Donner Party) and Janet Weiss (also of Sleater-Kinney) are the only two individuals alive who can make it ok to be happy about singing along to the ideas of suicide and lost love. They can do it because you dearly want them to, and because no one else has ever dared to try. These themes have become necessary inclusions for the band, and on Featuring “Birds” they are even accompanied by notions of love renewed. Quasi turns a new leaf?

Recorded at Portland’s Jackpot Studio by Mr. Larry Crane (editor ofTape Op magazine) in November of 1997, Featuring “Birds” is an expansion of Quasi’s technical and musical boundaries. For the first time, they have recorded in a professional studio, and for the firsttime they have used more than eight tracks (16, this time around). The songs date from late ’96, when Quasi was just recording their last album, up to the moment they entered the studio for this album. The sole guest musician on the album is Charlie Campbell of Pond, who wrote and played guitar on “Tomorrow You’ll Hide.”

“Coomes’s electric harpsichord has a sham-dignified sound twisted and distorted to its fraying point and Weiss’s slashing beats and sour-sweet harmonies tense it up even more.  These are the songs of smart people trying to find some way out of corrosive despair-indie rock’s Rumours.” [Top 20 Albums Of The Year, 1998] - SPIN 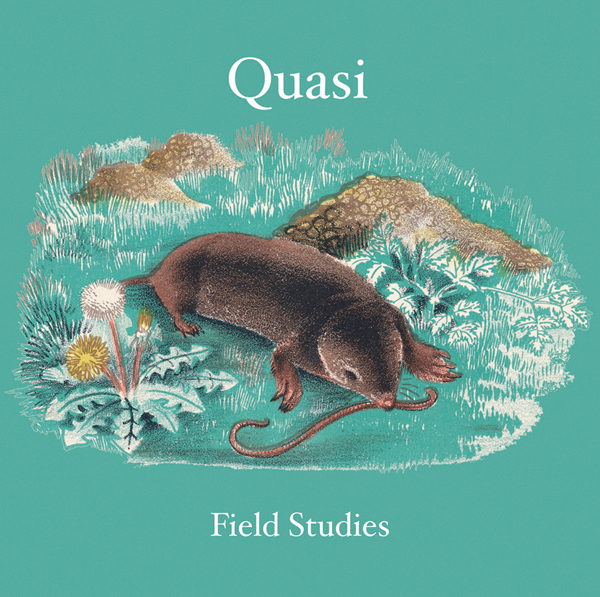 FIELD STUDIES (SEPTEMBER 7TH, 1999)
Quasi stretch out yet further on Field Studies, their fourth album, and easily justify their recent status as one of the foremost purveyors of underground pop. Every element that made their previous album, Featuring “Birds”, so widely acclaimed – concise songwriting, arching melodies, and dead- on harmonies atop occasionally clamorous and always- propulsive rhythms – is further developed on Field Studies. The tonal palette has expanded to include strings, church organ, theremin, and various electronic instruments, in addition to the keyboards, guitars, and drums that have always been their mainstays.

Somehow, Sam Coomes and Janet Weiss manage once again to play nearly all the instruments on the record themselves. They accomplish this task despite spending the better part of 1999 on the road performing either as Quasi, with Sleater-Kinney (Janet’s otherband), or as part of Elliott Smith’s touring band. Quasi returns the favor to Elliott in kind on Field Studies, enlisting his prowess onbass guitar on several songs.

“Like their heroes the Kinks, Coomes and Weiss have found an expert way of channeling dark, questioning sentiments into pop music…” - The AV Club

On their fourth album, drummer Janet Weiss and multi-instrumentalist Sam Coomes broaden what had been a rather insistent focus on the Roxichord keyboard pounding to include guitar and piano interludes. The result is the band’s most varied effort yet:  A collection of pop songs whose lovely vocal melodies and lush sonic textures-makes us home that Coomes is just kidding when he sings, “This may be the year I will disappear.” - Rolling Stone


Oh, and perhaps you’d like to see Quasi on Tour: