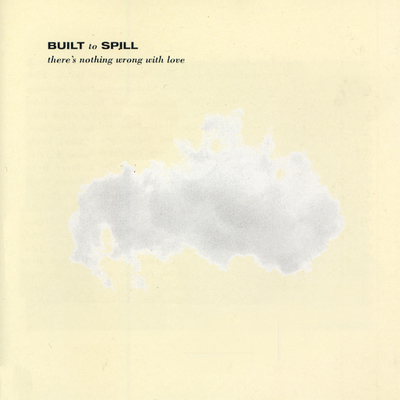 Speaking of exciting news:  Up Records (via Sub Pop) will reissue Built To Spill’s much loved classic There’s Nothing Wrong with Love, the second full-length album released by the legendary indie rock band. It was originally released September 13, 1994 on the Up Records label with the stellar line-up of Doug Martsch, bassist Brett Nelson, and drummer Andy Capps, with Phil Ek producing. The album features enduring singles “In the Morning,” “Car,” and “Distopian Dream Girl.”
There’s Nothing Wrong With Love will be available October 30th from Up Records - distributed through Sub Pop - and is now available for preorder from Sub Pop Mega Mart.
On a related note, theThere’s Nothing Wrong With Love playlist is also available for your audio visual consumption, featuring official videos for “In The Morning,” “Car,” “Fling,” and “Big Dipper” via Up Records YouTube channel [view it here]
There’s Nothing Wrong with Love was exceptionally well received by critics upon its release. It went on to earn “Best Albums of 90’s” notices from the likes of Pitchfork, PASTE, SPIN, and has sold nearly 140k copies to date. This new, vinyl edition is the first time the album has been available on vinyl since its original run.  Let the rejoicing commence!
What people have said about There’s Nothing Wrong With Love:
“Built To Spill’s Doug Martsch put Boise, Idaho, on the musical map with sprawling guitars, nasally vocals and heartfelt lyrics. Before the group fleshed out their sound with the guitar bits, BTS won over listeners with these straightforward, poignant songs. It’s an intimate glimpse inside one of indie rock’s great songwriters before he found himself.” [90 Best Albums of the 90’s] - PASTE

“The second album by Doug Martsch’s long-running band is a declaration of his awesome powers as a songwriter and guitarist…There’s Nothing Wrong With Love is the work of an artist who gets to treat Boise, Idaho, as a rock capital because he can outplay anyone: The sheer variety of instrumental textures Martsch crams into these songs’ riffs and fills and raw solos is amazing on its own.” - Wondering Sound

“True or false: Doug Martsch is the Peter Frampton of 1990s indie? Sure, he might not have the hair, the tight pants, or the voice box, but it’s difficult to think of another soul more worthy of resident guitar god; maybe J Mascis, but he never brought the pop side like King Framp. That’s the side most in evidence on There’s Nothing Wrong With Love, before Martsch started bringing the sprawl in spades. Humble, wry song-tales about heads-up-seven-up, Albertson’s stir-fry, and Bowie-hating stepdads abound, while earnest tracks like “Twin Falls” and “Big Dipper” set the pace for the entire Northwestern indie-pop scene.” [Top 100 Albums of the 1990’s”] - Pitchfork

“…Their second full-length and first genuinely great record…There’s Nothing Wrong With Love is the sound of scrappy mountain manchildren toying with their powers, pushing the limits of their form, setting the table for future tours de force.” - STEREOGUM

“The second album by Boise, Idaho’s Built to Spill was the cuddliest little guitar epic of the decade. Just as the luster was wearing off the grunge gold rush, singer guitarist Doug Martsch challenged slacker cynicism with basement-band symphonies that turned his own private Idaho into indie rock’s last unknown territory.” [Greatest Albums of the 90’s] - SPIN

“…Love is an absolute classic from the decade..” [“Dusting ‘Em Off”] - Consequence of Sound