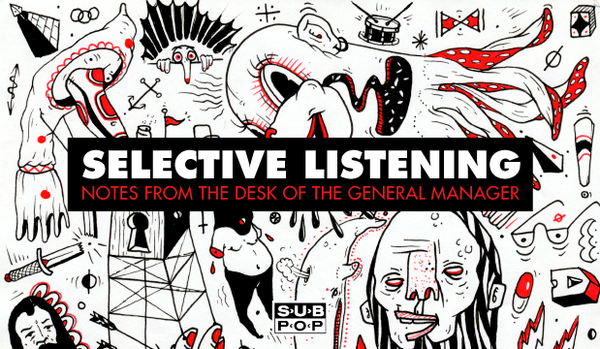 Selective Listening: Notes from the desk of the General Manager, May 2015

Sub Pop Sea-Tac Gives You So Much More

In a move that inadvertently gave clearance to shameless overuse of flight-related metaphors and jargon both here and elsewhere (but mostly here), on May 1st of last year we at Seattle’s biggest group of fans of Sub Pop Records (aka Sub Pop Records) gave wing to our latest and greatest brazen scheme with the opening of the Sub Pop store at Seattle-Tacoma International Airport. And, though we didn’t name it either Sub Pop Rock City or Terminal G (both excellent options), and landed instead on the simpler, more direct “Sub Pop,” this thing has really taken off!

In celebration of this feat, today, May 1st, at noon, the very excellent Hardly Art recording artist S will be performing as a duo for free at the Sub Pop store at Sea-Tac! As you are assuredly already aware, but really only rhetorically so, the following: S is the operational alias of Seattle-based superstar Jenn Ghetto. Cool Choices is the name of the most recent and very good S album, released on Hardly Art in September of 2014. Hardly Art is the younger, thinner, better-looking, and frankly-starting-to-get-a-little-smug-about-all-that sibling label to Sub Pop Records. The Sub Pop store at Sea-Tac is located on the secure side of security near the C Gate at Seattle-Tacoma International Airport, and is open for Business Time from 6 am to 10 pm every g-d day.

But! Before all that (and for a few weeks after - this is a monthly column…), here a few, quick highlights from our first year of retail residence at Sea-Tac…

- Somewhat and even outright famous people, who have recorded for Sub Pop or not have come in to the store and have often allowed us to take their pictures there! People like: Jack White, Elvis Costello, Jemaine Clement, Duff McKagan, Dave Grohl, Courtney Barnett, Tom Douglas, Corin Tucker, Tunde and Kyp from TV on the Radio, Elijah Wood, J Mascis, Nardwuar, and the list goes on, though not much further! Sometimes these people have even bought things from the store!

- In addition to the records, t-shirts, posters, hats and mittens that one might expect from a bona fide, professional record label, we have learned how to make, or affix our logo to, a whole bunch of unlikely stuff! Stuff like: pencils, combs, bags for vomit, pillows for necks, koozies for cans, glasses (both shot and pint), cards (both greeting and post), blankets, beach towels, and that is already way more than enough for illustrative purposes. We’re talking about real airport shit here! But Sub Pop airport shit!

- We now find ourselves fortunate enough to have an extended family of co-workers at Sub Pop at SeaTac who are tirelessly congenial and enthused, and who interact with visitors to the store in a way that speaks way better of us than we likely deserve (even if some large percentage of those visitors have little to no idea what Sub Pop might be). These co-workers are a genuine source of inspiration and pride and we hope that our vampiric attachment does not drain them of these qualities.

-  Shocking to no one more than ourselves, we have managed to get and retain alarming security clearances!

I’m headed through Sea-Tac this week on my way to Toronto to see METZ play their two sold-out hometown record release shows, and even though I am only allowed to fly late at night and the store will be closed when I’m there, I will still stop by, loiter around the front of the place, recall fondly the time in April of last year when I passed by the as-yet-to-open shop with my two kids (the younger of whom: “Do you work here now? It’s AWESOME!”) and marvel at the wild improbability of it all.

Minus the part where you recall anything whatsoever about my kids, fondly or otherwise, you should do the same. Maybe buy yourself a comb?