Thank you for buying the fancy, colored-vinyl, deluxe version of Father John Misty’s new album, I Love You, Honeybear! Also, we are sorry that many of these fancy, colored-vinyl, deluxe versions of Father John Misty’s new album, I Love You, Honeybear are, it appears, warped! In our efforts to replicate the “wow factor” of such legendary album packages as the Rolling Stones’ Sticky Fingers zipper cover by Andy Warhol, we wound up accidentally replicating the “defect factor” of the same. In short, the extra, bulging thickness of the pop-up art in the Father John Misty jacket creates a lump that, when the LPs are sealed and packed, pushes into the LPs, causing the vinyl to warp and making that handsome, painstakingly and expensively produced jacket an elaborate record-destroying device. This oversight, and any attendant suffering, is our fault, and we are very sorry. We promise to be less ambitious in the future.

We are currently making 100% non-warped, colored-vinyl LPs to replace these damaged LPs. We hope to have a delivery date for those soon, and we will update this page as soon as we have that information. UPDATE: We expect to be able to begin shipping replacement LPs as soon as May 1st!

Please contact your place of purchase for instructions on how to obtain replacement LPs or refunds where replacements are not available. If you got it from Sub Pop’s online store please email websales@subpop.com with your name, address, and order number, and we will ship you replacement LPs as soon as they arrive, which will likely be sometime in mid-March early May. And, if you bought this album from Father John Misty’s website (Merchline), please contact them for replacement LPs here: http://help.merchline.com/customer/portal/emails/new. Please keep the jacket – we will be replacing only the vinyl itself. And we will be accepting requests for replacement LPs only through May 15, 2015! To reiterate, if your copy of I Love You, Honeybear is warped and you got your album anywhere other than Sub Pop’s website, or Father John Misty’s website, please contact your place of purchase.

In the meantime, please accept our apologies, and we hope you can enjoy the unmolested music of Father John Misty via the download code provided with your LP, and maybe also at one of his exciting, upcoming live shows.

Other things worth mentioning here and related to Father John Misty’s new and very good I Love You, Honeybear album…

In response to several emails on the subject, here’s info on something we did with this album on LP (both the deluxe and regular editions) that was NOT an accident: due to its length and the wide audio spectrum of the recording, we at Sub Pop, together with Father John Misty, decided that the album sounded much better cut at 45 RPM over 2 pieces of vinyl. Though we all prefer the listening experience of a single piece of vinyl, we decided in this case to prioritize audio quality (an admittedly very subjective determination). You’re welcome!

Seattle’s psychedelic rock sextet Rose Windows will release their self-titled second album, the follow up to their acclaimed debut The Sun Dogs, on CD/DL/LP May 4th in Europe and May 5th in North America via Sub Pop. Rose Windows, featuring the highlights “Glory, Glory,” “Strip Mall Babylon,” and “Blind,” was recorded in the fall of 2014 at Studio in the Country in Bogalusa, LA, and produced & mixed by Randall Dunn (Earth, Akron Family, Cave Singers).  You can now listen to heavy rocker “Glory, Glory” via Consequence of Sound.

CoS had this to say, “Marked by a smashing rhythm section and gnarly, over-sized guitar riffs, the track finds the band operating in the the proto-metal tradition of a slightly grimier Black Sabbath (see news story February 9th).”

Preorders for Rose Windows are available from Sub Pop Mega Mart, iTunes, Amazon and Bandcamp. All customers who pre-order the LP version of the album from megamart.subpop.com will receive the “Loser Edition” on red & black marbled vinyl, and a limited edition 7” which features the songs “Never Did Me Wrong” and a cover of Led Zeppelin’s “The Wanton Song” (while supplies last). Additionally, there will be a new T-shirt design available in two colors, both individually and as part of a bundle with purchases of the new record.

Rose Windows have scheduled a few headlining & festival dates in support of the release: February 20th in Seattle at Neumos; February 21st in Bainbridge Island, WA at Rolling Bay Hall; May 8th in Austin, TX for Austin Psych Fest’s Levitation 2015; And Memorial Day Weekend in George, WA for Sasquatch Festival. Please find a complete list of tour dates below.

About Rose Windows:
When Chris Cheveyo abandoned the finalized recording of his heavy instrumental post-rock band towards the end of 2010, it wasn’t out of a general cynicism towards expansive, heady music. There was just something about that specific palette of tones and the cut-and-dry melodrama of the songwriting that wasn’t satisfying anymore. So he culled his old habits and made a fresh start with Rose Windows, a Seattle-based sextet that drew upon everything from American folk to West Saharan guitar rock, from pentatonic proto-metal to traditional Persian music, from the darker corners of California’s early psych scene to the hazy atmospherics of contemporary drone artists.

It was a risky era for this sort of bold new venture—there was a lot of talk of austerity in 2010. People were upside-down on their mortgages. Gas prices were high. Not surprisingly, many of the new musicians of the Great Recession were solo bedroom artists, laptop producers, and lo-fi aficionados. It was a time to think small and live within one’s means. It was an inopportune time to create the kind of lavish, orchestral, spacious records that came out of the peak of album-oriented rock radio of the ‘70s. And yet that’s the kind of record Rose Windows made in the fall of 2011. Their debut album, The Sun Dogs, was a brave record—exploratory, diverse, and lush. It didn’t fit in with the escapist pulse of indie dance music, or the retrograde scuzz of garage rock, or the bucolic nostalgia of the breezy new folk scene. The Sun Dogs, with it’s bluesy dirge, exotic scales, and majestic sprawl, didn’t quite fit it anywhere. Yet its theme of “the everyday blues that capitalism and its hit man, religion, bring on all of us” was certainly apropos of the time (read more at Sub Pop).

Sleater-Kinney co-star alongside the cast of Bob’s Burgers in the new music video for the No Cities to Love track, “A New Wave”. Watch the few minutes of absolute animated brilliance in the embedded video, and pick up No Cities to Love from us right here.

Father John Misty’s fast-selling out headlining 2015 world tour accompanied by a 7-piece backing band, in support of I Love You, Honeybear has been extended through August 20th. International festival highlights include Coachella, Sasquatch, Field Trip, Hangout, Oya, and Way Out West. See a complete list of tour dates below.

In related news, you can also watch his beautiful “Take Away Show” performance of La Blogothèque…Honeybear closer “I Went to the Store One Day” (watch here).

I Love You, Honeybear featuring the highlights “Bored In The USA,” “Chateau Lobby #4 (in C for Two Virgins),” “True Affection,” and the title track, was produced by Josh Tillman and Jonathan Wilson, mixed by Phil Ek, and mastered by Greg Calbi at Sterling Sound. I Love You, Honeybear is available to purchase via Father John Misty.net,  Sub Pop Mega Mart, iTunes, and Amazon. 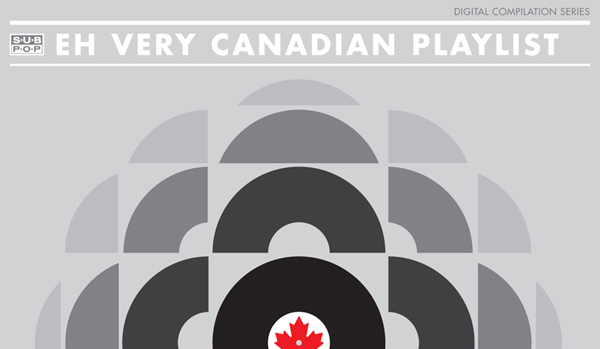 Sub Pop has a great history of working with artists from Canada, our wonderful neighbors to the north. Click to listen to “Eh Very Canadian Playlist”, featuring Canadian Sub Pop artists, both new and old, and boasting the brand new track from METZ, the ferocious “Acetate”, off of their May 5th record, II, which you can pre-order here. The playlist is on Spotify and Rdio. 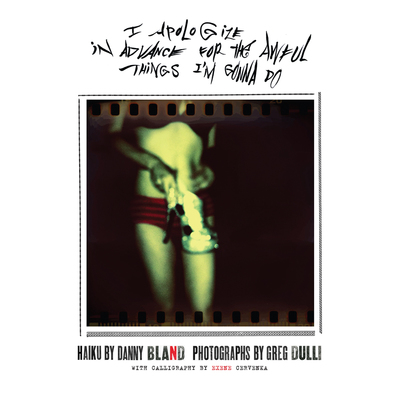 Special Apology in Advance for Valentine’s 2015!

Between now and February 12th, anyone who orders Danny Bland and Greg Dulli’s I Apologize in Advance for the Awful Things I’m Gonna Do AND makes a $25 or greater donation to the very worthy MusiCares organization, will receive a copy of the book with a personalized, original haiku written by Mr. Danny Bland himself, inscribed by hand into this same book’s endpapers by this same D. Bland. This personalized haiku could be about you or about some friend, loved one or enemy (present, former or future)! It is your choice! You have only to provide us with some descriptive insight into the person about whom this haiku will be writ. Please provide this descriptive information and your invoice number from your MusiCares donation in the comments field at checkout.

Clearly, this is the best Valentine’s Day gift idea to come along perhaps ever.

Here’s where you can make a donation to MusiCares:

And here is where you can order I Apologize…

And yes, we did a very similar if not identical promotional thing during the holidays. Poetry is just too fitting for Valentine’s Day for us to pass up the opportunity to try again!