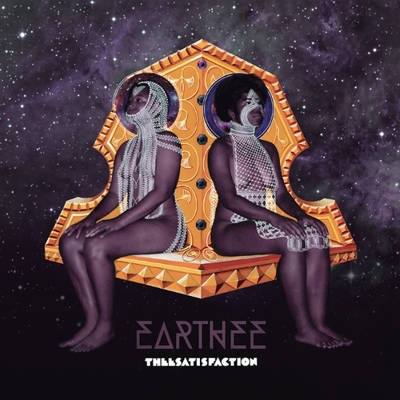 THEESatisfaction’s EarthEE is now available now on CD / LP / DL via Sub Pop. EarthEE is the follow up to awE naturalE, the alternative R&B group’s critically acclaimed debut, and is led by highlights “Recognition,” “Nature’s Candy,” and the title track.

EarthEE was produced by THEESatisfaction and Erik Blood, mixed by Blood at Protect and Exalt Labs: A Black Space and mastered by Adam Straney at BreakPoint Mastering in Seattle. The album also features guest appearances from Shabazz Palaces, Meshell Ndegeocello, Porter Ray, Blood and Taylor Brown.

EarthEE, along with “Recognition” and the title track, is earning THEESatisfaction acclaim from outlets likes of NPR Music, CBC, AV Club, Exclaim, NME, The Quietus, Q Magazine, Mojo, The Guardian, Consequence of Sound,  Okay Player, Treble, The Needle Drop, Pitchfork, The FADER,  Bitch, BUST, Dummy, and more. At radio, the album was #3 most added with CMJ reporters. On a related note,  you can watch the band’s just recorded KEXP session now.

THEESatisfaction’s 2015 tour schedule in support of EarthEE has been extended through May 9th. Highlights include:  CD release shows in Seattle (Feb. 26th at Neumos), Los Angeles (Feb. 28th at Jewel’s Catch One) and New York (Mar. 6th at Santos Party House);  SXSW (Mar. 20th-21st); And a support tour with label mates Sleater-Kinney (April. 16th-May 9th). For a complete list of tour dates, please view the attached flier or visit https://www.subpop.com/artists/theesatisfaction/tours.

EarthEE is now available for purchase from Sub Pop Mega Mart, iTunes, Amazon and Bandcamp. All customers who purchase the LP version of EarthEE from megamart.subpop.com will receive the limited “Loser Edition” on emerald-colored vinyl and a 7” single with “I Don’t Like You” on the A-side, and “Supa Dupa (Love Affair)” on the B-side (while supplies last). Additionally, there will be two-new T shirt designs available as stand-alone items or as part of a bundle with purchases of EarthEE.

What people are saying about THEESatisfaction:
“In theory, EarthEE is a cosmic, funky dance party. In practice, it’s a revolution.” [First Listen] - NPR Music

“The true gift of this Seattle-based duo is their ability to seamlessly weave serious commentary into music that  also seriously brings the party.” [Review, 4/5 Stars] - BUST

“EarthEE is remarkable in its ability to balance the obscure and experimental with the direct and familiar. It’s an album that engages with the history of black culture while challenging the political, cultural, and musical status quos at every turn.” [Review, B+] - AV Club

“EarthEE feels both comfortingly familiar and thrillingly alien, without striving too hard to be either.”
[Review, 8/10] - Uncut

“This album is highly recommended, as its afro-futuristic, honest, and raw philosophy is too delicious to deny.” [Review]  - Bitch Magazine

“(A)n informed and encompassing portrait of life as we know it, that pays its respects where it’s merited and condemns injustice when it’s warranted.” [Album of the Week]  - Dummy Magazine

“EarthEE is a powerful record, crafted by two black, queer women in a time when many people would encourage you to think that it’s easier than ever to be any one of those three things. But THEESatisfaction, through powerful metaphors and otherworldly imagery, are clever enough to reveal just how often all people are asked to hide behind that very sort of facade.” [Album of the Week] - Treble Zine

“Every moment is rooted in spacious, natural, sometimes esoteric beats. It’s a sonically challenging, chilled out, blissful creation, where samples are stacked and staggered, breathing and bleeding into each other. At turns it’s angry, sexy, vulnerable, empowering and healing, every moment flowing like liquid gold into the next.” [First Play] - CBC

“The title track ripples with cosmic incantations. Harris-White commands with the intoxicating force of a priestess: “Loosen up my mind/ Lengthen and unwind/ Release, one time.” Shabazz Palaces’ Ishmael Butler and emerging MC Porter Ray share reverent verses of their own, the former reading like a personals ad seeking a moment of transcendence with a celestial goddess.” [“EarthEE” track review] - Pitchfork

“20 Albums To Get Excited About In February” [EarthEE] - NME

“Blends Sun Ra percussion with woozily hypnagogic synths and a sprinkle of prog-jazz, in the best possible way – as ever, Stas and Cat duo sound like no one but themselves.” [“Recognition”] -  FACT

“A groovy, hypnotic jam that eventually leads to one rather engaging, synth-led interlude.” [“Recognition”] - Consequence of Sound

“On “Recognition,” the duo fuses their own soulful delivery with the esotericism of Erik Blood and Shabazz Palaces.” [“Recognition”] -  Mass Appeal

“Song of the Day” [“Recognition”] - The Stranger

“The panoramic rhythms, chants, and deep space synths on this cut are alluring and intoxicating.” [“Recognition”] -  The Needle Drop