The unholy union of Weird Nightmare and Ancient Shapes brings you the double A-Side experience of the year! “I Think You Know” w/ “Bird With an Iron Head” delivers two sides of sing-along power-punk you need to hear to believe.

The pairing, which will be available in physical form by way of a bright red-colored 7” single on Friday, October 21st, features Weird Nightmare’s “I Think You Know” on side A, and Ancient Shapes’  3-part suite “Bird With an Iron Head” (+official video), ”Imaginary Agony”, and “I’m Against the Wind” on side AA. All four songs are also available digitally today on all DSPs from Sub Pop.

Weird Nightmare’s Alex Edkins says of the union, “Daniel has been one of my favorite writers/performers for many years now and his work with Ancient Shapes and the Outfit are a constant source of joy. I’m super excited to be sharing this record with him.”

Weird Nightmare released his electrifying, self-titled debut featuring the no nonsense rock n’ roll of “Searching For You,” and the anthemic  “Lusitania,” earlier this summer on Sub Pop.

The album showcases a new side of Edkins’ already-established songwriting (METZ), with a raw, sugary blast of distorted pop. It exhibits all of his main band’s bite with an unexpected, yet totally satisfying, sweetness. Imagine The Amps covering Big Star, or the gloriously hissy miniature epics of classic-era Guided by Voices combined with the bombast of Copper Blue-era Sugar—just tons of red-line distortion cut with the type of tunecraft that thrills the moment it hits your ears. “I Think You Know” comes from the same intense burst of songwriting that spawned the Weird Nightmare LP and delivers yet another ear-worm of high-energy hooky song craft.

Ancient Shapes was spawned in 2015 as a recording side project of the wondrously prolific and shape-shifting renaissance man, Daniel Romano. Due to the ravenous demand for live performances of these first recordings, Daniel brought on David Nardi, Vee Bell, Roddy Rosetti and Ian Romano to take the songs to the people. The live band has been called “the best band since computers” and also “incredibly good as hell.” The group has since traveled the world over and have released the Ancient Shapes, Silent Rave, and A Flower That Wouldn’t Bloom albums. 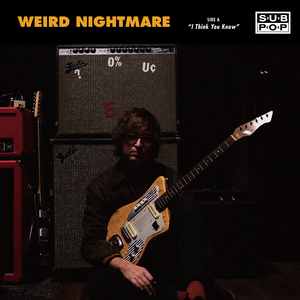 I Think You Know / Bird With an Iron Head