“Whenever you’re here, you’re alive” are the first words sung on Dynamite Steps, the upcoming new album from Greg Dulli’s Twilight Singers collective. That line comes from the opening track, “Last Night in Town.” Commencing a record with that title is a ballsy gambit, but there’s a method to his madness. “Last Night in Town” serves the same function as, say, a flash-forward that might open a film noir classic like Out of the Past, laying out the album’s arc in black and white right from jump. Dynamite Steps is the fifth Twilight Singers album, but the group’s first in five years. The Twilight Singers’ previous release, the acclaimed confessional opus Powder Burns, came out in 2006. Dynamite Steps is clearly the next chapter, a whole new level of catharsis and progress, evocatively cramming all the highs and lows of the maverick singer-songwriter’s past half-decade into unexpected sonic trapdoors. “Last Night in Town” encapsulates that vibe, setting the stage for the emotional thrill ride that’s about to come over the ensuing song cycle. On the one hand, the song is as signature Greg Dulli as it gets: starting with washes of spooky Mellotron, his soulful, confrontational howl rises to a messianic apex over symphonic, maximal layers of sound. It’s pure storytelling, reflecting on the impact of a near-death moment—but when a thick, dancefloor-aimed synth bassline surges through the mix, it’s clear this is a leap into the future, not doomed nostalgia.

Indeed, Dynamite Steps explores the thin line between life and death, mortality and immortality, resignation and celebration—that mythical moment when your life flashes before your eyes, drawn out here over the course of eleven songs. The album’s forty-three minutes prove an unflinching odyssey through the dark side, but one that’s ultimately redemptive in its scope and power. Dulli has never attempted anything so ambitious, neither sonically nor confessionally; that he makes it to the other side by the end feels redolent of triumph, but not without dues paid, hides scourged and lessons learned. The second song, “Be Invited,” features the haunting vocal tones of longtime Dulli friend/collaborator Mark Lanegan, adding portent to an already ominous chorus (“There’s something at work here/Chalk circles around your body”); over the song’s lurching country-blues waltz, Nick McCabe—kaleidoscopic guitarist for legendary U.K. group The Verve—adds not so much a guitar part as the hum of a swarm of bees hovering before the sting. The new textures of “Be Invited” pave the way for “Waves,” perhaps the toughest-rocking song Dulli’s ever made, exploring hitherto uncharted oceans of rage rendered as feedback squall; “Step aside while I manipulate,” he commands over shuddering analog synths and chiming, atonal guitars that recall vintage Sonic Youth.

Just as the shock and awe of “Waves” tasers listeners out of their comfort zone, the following quartet of tracks—possibly the greatest achievements in Dulli’s entire career—brings it all back home. Indeed, here are the songs that will make his most die-hard fans get over the fact that there’ll never be an Afghan Whigs reunion. The first, “Get Lucky” proves Dynamite Steps’ emotional crux, a stately piano ballad that looms somewhere between poignant and terrifying. From the dubby rimshot that echoes through its breakdown, “Get Lucky” makes clear we’re in a different dreamland—this is memory processed through regret, the violins swelling until there is literally nowhere left to turn. “I get lucky sometimes” goes the infectious earworm chorus; the accompanying musical thunderclouds, however, make clear that the song’s protagonist is dangerously deluded. The next track, “On the Corner,” could be an antihero rave-up off the Whigs’ revered 1996 opus Black Love, and proves one of Dulli’s best full-on rockers. With its blaxploitation wah-wah solos from Twilight SIngers mainstay guitarist Dave Rosser, catchy “ooh-oohs,” and relentless “I Wanna Be Your Dog” piano line—all driven by a thundering rhythm section, bassist Scott Ford and guest drummer Gene Trautmann (Queens of the Stone Age, Eagles of Death Metal)—“On the Corner” captures Dulli in his prime, regardless of what era it was made in. “Spread your legs/Insert your alibi” he sings here, a line that captures his timeless essence: a turn of phrase both clever and vulgar, its truth hitting home all too painfully. “Gunshots” and “She Was Stolen” follow—two of the most heartrending, epic anthems he’s ever released; as such, “She Was Stolen” proves one of his most impassioned, hopeful vocal performances. Critics talk about the soul influence in the man’s work, and it’s clear here—not in sonic signifiers that obviously evoke R&B per se, but in the sheer will to take a performance as far as it can go, no looking back.

According to the liner notes, Dynamite Steps was “shot on location” at various locales significant to Dulli’s life. You can hear the sense of place emanating up from the grooves: here, the weary nighttime decadence of New Orleans rubs up against the oppressive sunshine of Los Angeles and the desolation of Joshua Tree’s desert vistas. Dynamite Steps is particularly distinguished by its bed of spectral female voices, courtesy British chanteuse Carina Round and return appearances from the likes of Petra Haden, Leta Lucy and Ani DiFranco, the latter of whom duets memorably here on “Blackbird and the Fox.” “Dulli and DiFranco, odd a pairing as they might seem, have actually crossed paths before,” The Village Voice noted recently. “The moody ‘Candy Cane Crawl,’ from 2006’s Powder Burns, is one of the best things he’s ever done. This will very happily remind you of that.” Those female voices provide a necessary counterpoint to The Twilight Singers frontman, serving as a beatific alter ego, a salve to the wounds haunting the words. The songs on Dynamite Steps catch him in the act of pulling the thorns and arrows out of his flesh: once comfortable in this new skin, he’s finally able to aim his crosshairs at the dark storms of human relations with newfound lucidity. That’s clear in the pair of songs that climax the record, “The Beginning of the End” and the title track. The former proves one of the most unashamedly beautiful songs Dulli has ever recorded—a lush, soaring Pink Floyd-meets-Slowdive reverie about someone who’s finally learned to fly, but not how to land. He co-produced “Beginning…” with Steve Nalepa, a veteran of L.A.‘s vital electronica scene that’s home to the likes of Flying Lotus and Nosaj Thing. Nalepa appears throughout Dynamite Steps; that choice indicates both that this is The Twilight Singers’ most forward, electronic-leaning effort since the band’s 2001 debut, Twilight as Played by The Twilight Singers (co-produced by U.K. downtempo iconoclasts Fila Brazillia) and that Dulli’s musical taste remains as edgy, current and eclectic as ever (a recent playlist he put together for TheWorldsBestEver.com sprawls from the likes of Willie Hutch, Junip and Miles Davis to Laetitia Sadier, Jay Electronica, Black Mountain, Glass Candy, Salem, and Gonjasufi). The title track, meanwhile, proves a typically cinematic, cathartic Twilight Singers closer, its lyric reminding us, via Dulli’s personal journey, where we’ve come from, and where we’re going. “I’ll see you at the door/One more time, dear,” he sings as the song reaches its peak; from that, it’s clear this isn’t the last we’ll be hearing from him and the Twilight Singers. If anything, from the evidence on display, this really is just the beginning.

“If you do unto others/You will die by your own hand…”
— The Twilight Singers, “Never Seen No Devil” 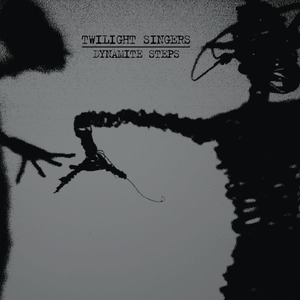