The Thermals are a post-pop-punk trio from pre-Portlandia-Portland, Oregon. The band was formed in 2002 and has since released six records and toured fifteen countries. It was Sub Pop that first broke The Thermals, signing them in 2003 after the young band had only played a handful of shows in the Pacific Northwest.

The first Thermals LP, the blisteringly lo-fi More Parts Per Million, was released by Sub Pop in March of 2003, when lo-fi was far from as fashionable as it had been in the Guided By Voices/Sebadoh era of the early 90’s, nor as lucrative as it would become in the Best Coast/Wavves era of the late 00’s. A demon joyride littered with caustic tales of love and lust, More Parts Per Million was at once ahead of its time and terribly out of date, in the best of ways. It was very cheap, incredibly fast and totally out of control. The album was rated a decent 7.5 by Pitchfork Media, before the little indie-rock site-that-could became the taste-making behemoth it is today.

For their sophomore LP, The Thermals presented the especially sophomoric Fuckin’ A. Produced by Death Cab For Cutie’s Chris Walla, Fuckin’ A was recorded and mixed in less than a week. And it shows! The album is a squealing, screeching, chaotic orgasm of sex, politics and electric guitar. Fuckin A was rated a not-too-shabby 7.8 by Pitchfork Media, at a time when a glowing review from the growing website was starting to really make a difference in a band’s career.

The Thermals third LP, and last for Sub Pop, was the critical darling The Body, The Blood, The Machine. A huge leap forward for The Thermals in terms of sound and scope, The Body… is a concept record of sorts, an epic saga that tells a cautionary tale of unchecked power commingling with religious persecution, The Body… was produced by Brendan Canty, who brought to it all the storm and stress you would expect from a member of the hallowed post-punk group Fugazi. It was rated 8.3 and given the coveted “Best New Music” award by Pitchfork Media, back when that shit MEANT SOMETHING, baby!

To learn more about The Thermals, please visit their website at www.thethermals.com 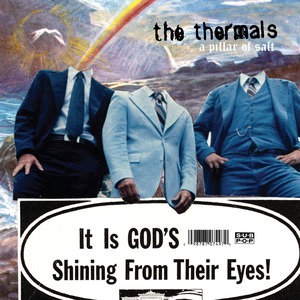