As respected figures in the underground rock n roll scene, The Makers have remained steadfastly opposed to the idea of stagnation for the sake of easy niche marketing. Since emerging into the fierce world of garage-punk in 1991, they have stubbornly pushed their musical boundaries far beyond expectations. In 2000, The Makers confounded any thoughts of pigeonholing theirs as merely a garage rock phenomenon with the release of their crossover, concept recording Rock Star God, which put them on top of college radio play-lists and critics’ top ten lists worldwide. David Fricke’s four-star review in Rolling Stone magazine declared “On Rock Star God, The Makers strut their stuff like they rule, right here, right now.”


And they do. Take a look at the band’s resume: They’ve toured around the world and recorded well over a hundred original songs. Live, The Makers take no prisoners, performing with an energy that has made their shows legendary. They’ve earned the respect of artists from Joey Ramone to Marilyn Manson, from Jon Spencer to Billy Childish. They’ve recorded for labels such as Estrus, Sympathy for the Record Industry, and now Sub Pop.

All of which brings us to the new record. Sub Pop is proud to present the latest evolution in The Makers’ saga with this, the band’s 7th full-length, Strangest Parade. Splitting the recording between Vancouver, BC and Seattle, WA, and working with Grammy-nominee (and Fastback) Kurt Bloch, this is The Makers laid bare. Strangest Parade exposes a more heartfelt, introspective side of songwriters Michael and Donny, while maintaining the bands’ trademark vitality and swagger. Equal parts death, regret and diminishing hope, “Suicide Blues” is testament to the album’s melancholic mood. Whereas “Addicted to Dying” is a full-on, old-school Makers rock monster, “Concert of Colors” and “Somebody Calling My Name” are epic, soul-searing ballads. The songs “Laughter Then Violence” and “Elvis, John and Jesus” faintly recall the ghosts of Love and Queen taken to the sonic level that is today. Strangest Parade presents a host of surreal surprises, excitement and classic rock n roll glory as only The Makers can provide. 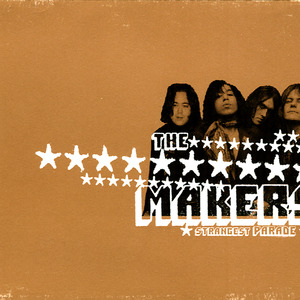 The Makers Tiger of the Night/Miss Fay Regrets 7 inch