Blake Sennett and I are debating the definition of the word “filigree.” We both think it has something to do with horses. My dictionary, however, proves us wrong. It actually refers to “any ornamental work especially of fine wire of gold, silver, or copper.” We realize the horse association comes from the fact that saddles are often said to be filigreed. Then we move on to the word “piquant” and neither one of us can define it. But in case you’re wondering, it means “agreeably stimulating to the palate; engagingly provocative; pungent; spicy.”


These are the two words I remember as I sit down to write about The Elected. And it makes a lot of sense. Because really? I am writing about a quartet of Californians with filigreed hearts and piquant wit.
The Elected, fronted by Blake (Rilo Kiley guitarist/co-songwriter), released its debut album, Me First, in 2004. Recorded sporadically at pal Elliott Smith’s studio with Bright Eyes superman Mike Mogis and The Postal Service’s Jimmy Tamborello, the album was filled with sparse, intimate gems twinkling pop songs that recalled 60s-inspired West Coast pop, the blissful twang of Gram Parsons and the crumpled whispers of Neil Young.
Sun, Sun, Sun furthers that tradition but also raises the bar. Where Me First sparkled with a lo-fi airiness anchored primarily by a mixture of drum machines, sequencers, guitar and lap steel, Sun, Sun, Sun takes that aesthetic to great new heights. Produced by Blake and multi-instrumentalist Mike Bloom at various L.A. locales, as well as various places along the road while on tour with Rilo Kiley, it draws from deep within the classic rock canon summoning everything from early Grateful Dead, The Beatles, The Band, Pink Floyd, and The Eagles. This time out, the band experiments with a greater depth of sound (think ‘70s hi-fi rather than modern-day lo-fi) and influence (think more classic, less country). Fans of Rilo Kiley will no doubt ally themselves with The Elected’s sharp-witted pop sensibility and remain close by. But Blake’s blatant sonic and thematic departures from that realm and his allegiance to less orthodox songwriters like Jim Croce and Tom Waits will no doubt appeal to a broader audience as well.
From the stripped-down title track, laced only with skeletal guitar and muffled piano, to the cheeky blues throwback “Did Me Good,” to the blissfully slinky, organ-drenched assertion of self-possession in “Biggest Star,” to the album’s stadium-sized centerpiece, “Not Going Home,” songs swell from tiny whispers to anthemic soul shakedowns, roguish blues breakdowns, cooing pedal steel, sassy organ runs, regal horn arrangements, stacked harmonies, lurking melodies, and guitar work both blinding and bashful.
Throughout Sun, Sun, Sun, Blake spins rousing narratives about where hearts might go when they fall off our sleeves, the places we live when we’ve lost our home address, and the ironies that snicker rather loudly when we call ourselves adults. Maybe it’s coming of age when you’ve already gotten there, getting back to your roots when they’ve long been ripped up, or moving forward and always looking back. Whatever the case, the fact remains: Sun, Sun, Sun will break your heart, take you home, hold your hand and carry you forward. And for once, you don’t have to keep your eyes on the road Blake’s doing it for you. 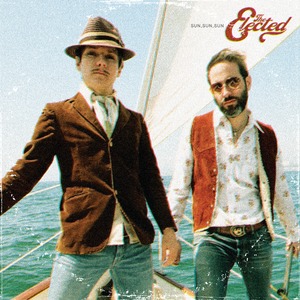