New Zealand has always boasted a per capita rock band ingenuity few countries can rival. Instead of the usual departure points—Beatles, Stones, Beach Boys—paragons of the NZ scene lifted off from the next generation. The Velvets, Modern Lovers and Television inspired these musicians, all living together in one small corner of the world, who, over the past thirty years, have gone on to create some of the greatest music to be heard. Enter: The Brunettes.

The Brunettes are a revelation simply by doing everything right. A sincere love of rock’s history of emotional directness tremors through every measure, and their male-female vocals, chugging guitars, playful keyboards, and glorious harmonies manage to combine numerous elements into simple, straightforward, actual songs. The charismatic fun of a tune pulls you in, while below the bubbly surface sits the song’s innovations. Or rather, the cosmetics may grab you straight off, but the depth of structure reveals itself more with every listen.

Having met when both their respective bands played together, Jonathan Bree and Heather Mansfield joined up—for a short time romantically. It was kismet, and they set about playing out and making records. Their first show outside of their country, a trip to London in support of 2004’s Mars Loves Venus, saw them opening for The Postal Service, and caught the attention of Sub Pop poobah, Jonathan Poneman. The Shins signed on as fans, and both bands toured together in New Zealand and the United States.

What did everyone see that won them over? With a shifting roster of touring musicians, The Brunettes’ performances are nothing short of creative explosions. Instead of emulating the studio versions, the band tackles the songs anew, adding instruments, with band members feverishly dropping one to pick up another to play. What they do live is all intuitive, as Bree says, “We do what we can to work with the songs—play more upbeat stuff and avoid the sequencers and synthesizers.” Hunching over a computer is fine in the studio, but doing it live has been proven time and again to be less than stimulating. “We’ll go through a lot of effort to make it sonically and visually interesting,” Mansfield says.

After a few years of touring, we get Structure and Cosmetics, recorded piecemeal in Portland (where The Shins kindly lent them guitars and amplifiers), New York, and their hometown Auckland, New Zealand. While The Brunettes established themselves as experts of short, sweet pop songs, the tracks on their new record stretch a bit longer, and strive towards deeper melodic goals. Blame their nation’s rock history. “I just discovered Tusk,” Bree says, “I’ve always been a fan of Rumours. And you don’t find a Wings song that goes for two and a half minutes.” Much like his brethren, Bree’s inspiration comes from the second wave—who needs to hear the Beatles when you’ve got Wings? Take the original notions and reformulate them (structure), dress them up (cosmetics)—the perfect rock song recipe. Yup, listen to “Her Hairagami Set.” The simple piano riff, the thick guitar sound, chirpy percussion… it takes just a few carefully chosen ingredients to convey such charm. Or try “Wall Poster Star” for their melancholy side, with its lazy tempo and Mansfield’s refrain, “Down down they come/Wall poster star.” Don’t read too into that. We’re all just having fun here, right?

The Brunettes are the 87,746th band to prove that rock music is great. That doesn’t make them any less exciting, as the essential ingredients—songs, hooks, fun—are all here. All you need to do is listen. 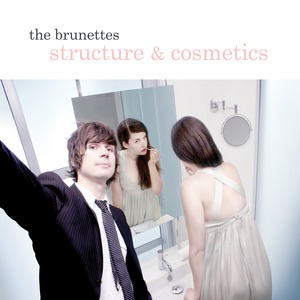