Greg Hughes, the driving force behind Still Corners, is not one to rest on his laurels. Despite the critical plaudits hurled at the band’s 2010 Creatures of an Hour debut longplayer (“indulgently seductive” opined NME; “an astounding debut” purred Drowned in Sound), Hughes is blessed with the kind of inexorable ardour for refreshing and sharpening his muse that is common to all connoisseur sculptors of apparently effortless, instantly elegant pop music. “I’ll never be satisfied with any of it, I need to keep trying new things”, he concedes of his ever-burgeoning musical project. “Still Corners is The Enterprise, for me.”

Riding that insatiable kinesis over the last two years has resulted in Hughes, along with singing accomplice Tessa Murray, fashioning a devastating sophomore album, Strange Pleasures, which is surely destined to usher Still Corners to a deserved place at cerebral dream-pop’s high table. Where its predecessor soared on sugared layers of shoegazing-infused retro-futurism, Strange Pleasures proffers a leaner, more acute extrapolation of ’80s-suffused song and studio craft, navigating a sinuous trajectory between velveteen Angelo Badalamenti noir-pop torch song sophistication and ethereal Cocteau Twins beauty, with exquisite meanders through the glacial but mellifluous territory first mapped by Modern English, The Cure and The Passions, with nods along the way to cool, graceful detachment a la ’80s Euro avant-poppers such as Berntholer and Virna Lindt.

“I think some of the above have probably been an influence-I’m a child of the ’80s,” Hughes concedes when presented with a list of Strange Pleasures’ possible antecedents. “But I see it principally as a widescreen pop album, clear, with upfront vocals. It’s a little epic, but not really retro-futuristic. There aren’t a ton of layers this time; everything has its place and is focused. What I hear is variety. Some reviews described Creatures… as ‘scattershot,’ but I need that kind of diversity-it’s a part of me. Tessa’s voice ties it all together beautifully…”

Indeed, Strange Pleasures delivers a consistency of purpose, even as it oscillates between the glassy, motorik swoon of “The Trip,” the Teutonic synth-pop of “Berlin Lovers” and the haunted, mysterioso ambience of “Going Back to Strange” (“that song is about returning to something you’ve rejected in the past but have realized that it’s in fact a part of you,” Hughes explains). Sure enough, Murray’s gorgeous, aerated voice, equal parts Elizabeth Fraser, Julee Cruise and Broadcast’s Trish Keenan, remains an alluring masthead signature throughout, from her icy delivery of the unshakably catchy “Beginning to Blue,” to the kohl-eyed glissandos of “All I know” and “Midnight Drive’s” almost Lana Del Rey-like narcotic purring.

For Hughes, the new album is more than just a stylistic progression from the gossamer-textured, deeply personal Creatures of an Hour. “Musically, Creatures… was soft and relaxing but it was a massively cathartic record for me. I was destroyed after being in a relationship; it’s all in there, suicide… all that stuff. I needed to calm my soul and Creatures… did that for me. Strange Pleasures is more of an adventure out toward the open seas. It’s an exploring type of record: strange new lands, strange new love…”

The new album was captured in Hughes’ Greenwich studio (in a process he describes, with typical ingenuousness, as “tinkering”), with the protean multi-tasker handling all the instruments and penning the majority of the lyrics. Its strikingly immersive sonics and pared back, architectural arrangements are no accident, it transpires. “I started taking the production more seriously this time; instead of listening to records and going ‘oh, that’s cool,’ I actually studied everything: sound absorption, speaker placement, mixing, mastering, microphones… It’s a never-ending journey, but I learned a ton this time around.”

Hughes knows a thing or two about journeys. A native of Austin, Texas, a decade ago he was set on moving to Brooklyn to further his musical ambitions, but fate intervened after he fell in love with an English girl and crossed the Atlantic to begin a new adventure. Clearly something of a Europhile, for Hughes, the capital offered “a wider view of everything: people, food, philosophy, music, film… London called and I’ve been here ever since.” It was in London, after getting off a train at the wrong station, that Hughes’ path first crossed with that of sometime chorister Tessa Murray, and after this suitably cinematic, Brief Encounter-like assignation the missing piece in the Still Corners jigsaw fell into place.

A self-released 2008 mini-album, Remember Pepper, heavily influenced by nouvelle vague cinema and Ennio Morricone soundtracks, provided Still Corners’ first above-the-parapet appearance, while a brace of well-received singles, and a series of spectacular live shows, with the Hughes/Murray duo augmented by additional musicians and emblazoned with Leon Dufficy’s seductive film projections would bring Still Corners to the attention of Sub Pop, who duly signed them and set about releasing the critically lauded single “Cuckoo,” followed by the equally extolled Creatures of an Hour.

Presaged by the beguilingly soaring “Fireflies” single, Strange Pleasures brings the Still Corners story up to date. A culmination of all that has gone before, for Greg Hughes the album is testament to the potency of untrammelled creative instinct; its title references: “The strange idea of falling in love; the strange idea of letting the songs go where they wanted to. They’re both tied together, the feeling of letting go and having it all wash over you. I was just doing whatever came out, not getting in the way of the songs at all. I’ve been practicing that my whole life-how to get out of the way of a song. Strange Pleasures is a pop record at heart, with anything that’s ever influenced me coming to the front.” 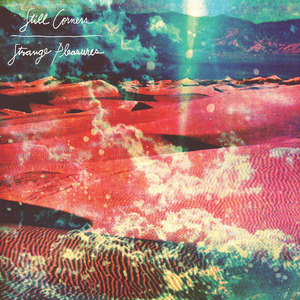