Spoek Mathambo makes the Afro-futurists look old school. With the arrival of his second album, Father Creeper, he’s one man building up an army to make his creative visions a reality, rewriting any artistic laws in his way.

Johannesburg’s Spoek Mathambo (real name: Nthato Mokgata) first hotwired our world with a series of collaborative projects—Sweat X, Playdoe—that placed his smart, dirty vocals on top of electro-rap bangers that activated dancefloors across the globe. Things went darker and deeper with his 2010 debut album, Mshini Wam (translation: “bring me my machine”), a record which took Spoek’s love affair with South African culture and his coined “township tech” as a starting point. As always, he pulled those influences in a direction all his own (think: a pitched-down wobble-house cover of Joy Division’s “She’s Lost Control”). Mathambo topped things off with a grip of visually thrilling videos depicting a fresh-to-death urban gothic vibe, and months of touring across US, Europe, and South America.

Father Creeper took shape during this touring. Mathambo got started doing hands-on audio production during long days on the road with Copenhagen-based musician CHLLNGR. They began with haunting lyrics about conflict diamonds, penned by Mathambo’s wife Ana Rab (aka Gnucci Bananaa), fleshing out the verses into an epic, synth-driven post-dubstep heater. “Put Some Red on It” would become Father Creeper’s first single.

Inspired and confident, Mathambo put international collabo offers on pause as he regrouped to make his second album with a close cadre of family and friends. A distant uncle phoned—“Nthato, I hear you’re making music! I myself am an electronic music composer!”—within days they were in the lab, crafting beats. Mathambo’s live band, Mshini Wam, honed new tracks while on tour. Back in Jo’Burg, Spoek called in childhood buddy, pianist Theo Tuge (their grandmothers kicked it back in the day) as musical co-director for the entire project. Tuge and Mathambo were choirboys when they were 12 years old—that’s 2 years after Spoek started rapping, and 2 years after Apartheid was dismantled.

One of the strongest additions to Spoek’s camp is Nicolaas Van Reenen, a musician whose liquid guitar lines snake and ripple across the album. Between endless African reissues and African-inspired indie bands, African guitar styles are having a zeitgeist moment, and Father Creeper’s guitar work, which ranges from summery highlife melodies to amped-up rock riffs, is a critical step forward.

The album was polished off during late nights in Malmo with a top-notch French producer named Marvy Da Pimp. Mathambo and Marvy worked to massage the sonics with analog outboard gear for maximum thump.

Even before you sink into the lyrics, Father Creeper glistens with pure sonic power. Each song arrangement is a statement in and of itself. Rock moments swerve electronic. The crisp, changing rhythms of Mathambo’s live drummer go cyborg with drum machine beats. Soulfully sung choruses shift up into double-time rap choruses as video game bleeps splash through Mathambo’s gutturals. And that’s just on the opener, “Kites.” The big picture shows us a musician hitting his stride with enough confidence and vision to craft songs as robust and challenging and attractive as life in our electrified, apocalyptic 2012.

On Father Creeper, Mathambo moves from being a smart and sexed-up rap prince to a bandleader juggernaut who uses every means available—rapping, singing, production, visuals—to articulate A) his intrinsic weirdness, B) the visceral tensions and irrepressible vitality of contemporary Johannesburg, from belly-hungry and culturally ravenous post-Apartheid teens to grizzled elders who have seen the serious heavy and C) an impressive commitment to making music magic. In other words, there is fucking and poetry, and it’s hard to separate the scary moments from the sublimely beautiful ones.

In 2011, South African author Lauren Beukes won Britain’s most prestigious science-fiction prize for her novel Zoo City. Set in Johannesburg, Zoo City revolves around a sassy ex-junkie and her magic sloth caught up in a murder intrigue involving teen kwaito-pop stars. It is nuts. It is also very good. Of course, Spoek appears in the novel. Everything’s starting to make sense. Is Africa the future? Maybe. Probably. Whatever the case, Africa is the now, and nobody is expressing that better than Spoek Mathambo. 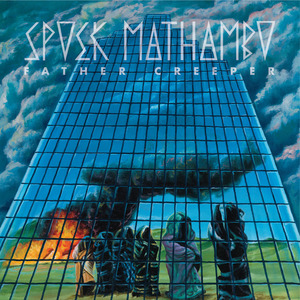