At their best, well-written, expertly-executed songs do more than just tell a story & they pose important questions. On If Songs Could Be Held, her third full-length for Sub Pop, Seattle songwriter/vocalist Rosie Thomas approaches the sometimes difficult but universal topics of introspection, identity and love with bravery, honesty, and above all, stunning beauty. These songs aren’t all about Thomas’ personal experience, however. This departure into the fictitious is only the first of numerous artistic stretches from 2003’s Only With Laughter Can You Win and Thomas’ 2001 Sub Pop debut, When We Were Small. Making a concerted effort to remove herself from her comfort zone, the Seattleite went so far as to pack her bags and work on the new album amidst the hustle and heat of Los Angeles. Thomas may have already sounded angelic before recording in the City of Angels, but the bold resolution in her voice this time around was certainly born of the strength she gained taking chances.

“I felt that in order to push myself musically, I would have to take myself outside of what is familiar,” Thomas, who approached her songwriting technique and vocal delivery using a fresh methodology during the recording process, explains. Her intense focus and admirable openness paid off: from the palpably raw explorations of learning to love on “Guess It May” to her warm duet with songwriter Ed Harcourt on “Let It Be Me,” If Songs Could Be Held exists as Thomas’ masterwork, lyrically painted with a bright and dynamic emotional palette. Her themes are thick with literary foils: delicate, but steeped in innate strength. Thomas examines femininity as well on “Time Goes Away,” based on her mother’s stories. “Pretty Dress,” which poses questions about the difficulty and necessity of exploring "potential and how that process relates to ideas of beauty and identity, is told as a parable.

Although longtime collaborator and close friend Eric Fisher was an integral part of the compositional and creative process as he was on previous records, If Songs Could Be Held marks the first time in the course of her solo career that Thomas has collaborated with musicians outside her circle of family and friends. In addition to the aforementioned duet on “Let It Be Me,” the new album features contributions from Liz Phair guitarist Dino Meneghin and accomplished film soundtrack string arranger Josh Myers.

As an artist, Thomas’ relationship with her songs has always been intensely personal and often tumultuous: her creations are “heavy, and wonderful, and taken care of even like a friend,” as she puts it. Since Sub Pop was first introduced to her delicate vocals on Damien Jurado’s Ghost of David (Thomas sings on “Parking Lot”) and Badlands: A Tribute to Bruce Springsteen’s Nebraska (she and Jurado duet on “Wages of Sin”), Thomas’ formidable solo career has gained her acclaim from critics and fans alike. No Depression calls her voice “delicate, exquisite,” and Paste Magazine labeled her a “powerhouse vocalist.” Aside from the aforementioned previous full-lengths, she has toured extensively with labelmates Iron and Wine and The Shins.

From Wikipedia, the free encyclopedia.

Thomas released her third album, If Songs Could Be Held, in 2005.

Thomas also performs as a stand-up comedian under the name Sheila Saputo.

In March 2006, Rosie was invited by Toronto indie rock label Paper Bag Records to exclusively contribute to their See You on the Moon! Songs for Kids of All Ages compilation with her song “Faith’s Silver Elephant”.

In April 2006, Pitchfork erroneously announced that Thomas and Sufjan Stevens were having a baby together, but were forced to print a retraction. Denison Witmer and Thomas later admitted it was an April Fools’ prank.

*The most current Rosie Thomas updates can be found @ Wikipedia.

This article is licensed under the GNU Free Documentation License. It uses material from the Wikipedia article ‘Rosie Thomas’. 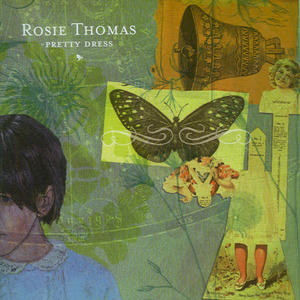 Rosie Thomas These Friends of Mine CD