Historians, rock critics and sports announcers have all spent plenty of time waxing poetic about the sophomore slump, but don’t waste any time pulling out that reference for Descended Like Vultures, Rogue Wave’s second album for Sub Pop. While the album defies expectations as much as it defies the odds, singer/guitarist Zach Rogue knows the score: “That’s the whole thing with the title,” he admits. “It’ like waiting for the other shoe to drop this perception that everyone around you is going to turn their back.”

A related adage is that you have your whole life to write your first album and a year to write your second, but Rogue had anything but writer’s block after completing Out Of The Shadow and seeing it re-released by Sub Pop in 2004 (the original, limited pressing was released on the band’s own label in early 2003.) In fact, the group entered the studio at the end of March with more than enough material for a full-length (three albums worth, to be exact). “I’ve wanted to record records for years and years and years, so really, it’s like someone opened the door for me to get started,” explains Rogue. “I feel like Descended Like Vultures is actually the beginning this is really where we start.”

Though Rogue assembled the Oakland, CA, quartet which includes fellow multi-instrumentalists Pat Spurgeon (focus: drums), Gram LeBron (guitar) and newest member Evan Farrell (bass) in late 2002, Descended Like Vultures is the first time the band’s leader has ever made a record with a whole group in the studio. The band spent 10 days with Bill Racine (who also produced Out Of The Shadow with Rogue) at Supernatural Sound in Oregon City, OR, resulting in the creation of 11 tracks that journey through a dreamy landscape inspired by several decades of classic rock and pop (from Fleetwood Mac to Neil Young to My Bloody Valentine.) The Mark Kozelek-esque “California” and the XTC-flavored “Catform,” which sports Rogue’s most dazzling vocal performance to date both feature cold yet inspired examinations of human nature informed by Rogue’s experiences on the road.

With another amazing album under their belt and a live show that’s getting tighter every day, Rogue Wave are prepared to hit the road this fall to give the world another taste of what the creatively thriving post-dot-com-explosion Bay Area, which includes everyone from Faun Fables to transplanted Brit, Scout Niblett, to Vetiver, to labelmates Comets On Fire has to offer.

“I don’t think it’s any coincidence that a lot of the resurgence is happening in the wake of the money drying up,” says Rogue, whose dismissal from a Web development company in 2001 gave him the time to work on the songs that eventually gave birth to Rogue Wave. “Bands are able to thrive because it’s a little bit more affordable, Oakland in particular.”

For the first time as an entire unit, Rogue Wave went out of its way to create a free-flowing album that includes equal amounts of tension, release and resolution. In the process they have made a brilliantly layered, expertly crafted album that changes shape with repeated spins. 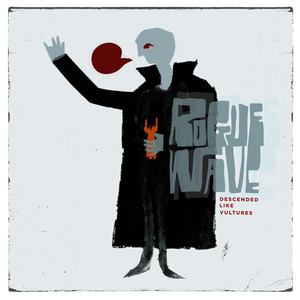