The new Pleasure Forever album, Alter, is the hungriest sounding record I have heard in a long time. Starving in new ways. It could have been called Wicked Shivering Columbine, the title of track five. Alter is nothing if not Hungry, Wicked, Shivering.

In music there is only a very small percentage of bands/artists that are good, bands that make a contribution. Pleasure Forever is one of them. They seem almost blind to their contemporaries, as more bands should be. Spiritual aristocrats in every way.

If I had a jukebox I would put Pleasure Forever between Jacques Brel and the Dirty Three. Of course they sound like neither.

Pleasure Forever reach beyond the vulgarity and laziness of most contemporary music. All these “dark” keyboard driven bands coming around as of late, they are (generally speaking) not good. Don’t be fooled. They cannot touch this three-piece band. Not even close. This is heartbeat and chills music, new and timeless. It creeps in and the gate is locked. The sound is menacing.

In a world that is doing its best to make us hate music, bands like this can be our Saint Bernard. Redemption in and for song. That we can go to a bar, have a drink, and watch this band is a true blessing. A way to be at the center of what is happening and good. Right now. In our own time. This is a rare fruit.

As a result of its mysterious imagery and allusions to dark excess, Pleasure Forever’s self-titled debut was often considered a concept album that celebrated living life on the brink of collapse (landing on Buddyhead.com’s “Best of 2001” list with the following succinct summation: “Songs about drugs and orgies made with only guitar, piano, and drums”). With Alter Pleasure Forever sounds evermore lush, heavy and sinister while maintaining its warped ‘60s pop undercurrent. The trio’s second full-length for Sub Pop is as intense, brooding and taut as we’ve come to expect. But, there’s an increased emphasis on the payoff, the catharsis at the root of all good, visceral rock and roll. Literary and cultural allusions aside (because, come on, that highbrow stuff is so off-putting!) this here is a matter of heart and hands, as well as head (all apologies to Mr. Spencer Moody for the lifted reference).

The trio is comprised of vocalist/keyboardist Andrew Rothbard, guitarist Joshua Hughes and drummer David Clifford. Pleasure Forever, who have toured with The Damned, Les Savy Fav, Murder City Devils, Dead Low Tide and others, was once known as SLAVES and all three members played previously in The VSS. 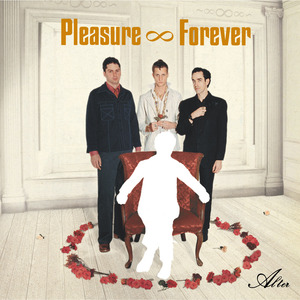