Patton Oswalt has been a stand-up comedian for almost twenty years—and here’s his second full-length comedy album. It’s his first release on Sub Pop Records, who have not been tricked into thinking he’s some sort of Czech death metal band.

Werewolves and Lollipops is the follow-up to 2004’s mildly-selling Feelin’ Kinda Patton (United Musicians). The new album comes packaged with a revolutionary image-and-sound delivery system called a “DVD,” on which purchasers can see Patton performing much of this material live at the 40 Watt Club in Athens, GA. He also shoots guns, bowls, and eats things1.

The album contains, among other things, Oswalt’s rants about KFC, G-rated smut, late-life pregnancy, and escaping the pull of the coolest places on Earth. An earlier press release from Sub Pop describes Oswalt’s comedy as, “…evocative of other Czech doom-noise outfits such as Clebknopf’s Stagnant Nightmare, Mortuary Picnic and Flelv.”

Patton has appeared in over twenty movies, including Magnolia, Reno 911!: Miami and the documentary The Comedians of Comedy, which he also created and produced. On the set of Blade: Trinity, Wesley Snipes would only answer Patton if Patton called him “Blade2".

In addition to playing the character “Spence” for nine seasons on the CBS sitcom The King of Queens, he’s a frequent guest on Late Night with Conan O’Brien and Jimmy Kimmel Live. He’s also a recurring voice actor on Kim Possible, SpongeBob SquarePants, Aqua Teen Hunger Force, Crank Yankers, and video games like the Grand Theft Auto series. He gets killed in a lot of those. He’s also appeared on programs like Seinfeld, Mr. Show and Newsradio, where he wasn’t killed.

Oswalt is also a regular columnist for The New York Times Magazine, and was an un-credited writer on the Borat movie. This summer, he’s the lead voice in the new Pixar film, Ratatouille, playing a rat named Remy who dreams of being a chef in Paris. We were going to try to write a joke or something here, but that last one’s flat-out awesome.

He has also released 222 (Chunklet), an unedited version of 2004’s Feelin’ Kinda Patton in that same year, along with the Comedy Central stand-up special No Reason to Complain. A limited-edition EP called Patton vs. Alcohol vs. Zach vs. Patton (with Zach Galifianakis) was later issued, as was the limited edition Pennsylvania Macaroni Company EP. A third EP, Squeeze’s Greatest Hits, was blocked and devolved into an ugly but fun lawsuit.

Werewolves and Lollipops was recorded at the Cap City Comedy Club in Austin, Texas in December of 2006, and was produced by longtime Comedians of Comedy co-conspirator and Chunklet Magazine publisher Henry Owings.

This July, in Prague, Mr. Oswalt starts a Central European tour opening for Death By Screaming and Warp-Spasm.

1 He doesn’t kill any of the stuff he eats. 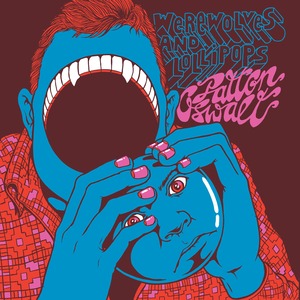