Party Dozen are a 2-piece noise band from Sydney made up of Kirsty Tickle (saxophone) and Jonathan Boulet (percussion and sampler). Since forming in 2017, they have become renowned in Australia for their incendiary live shows, touring and playing with acts such as LIARS, Tropical Fuck Storm and Viagra Boys. Exactly what Party Dozen are is completely up to the listener. Doom. Jazz. Hardcore. Psychedelic. No-wave. Industrial. Although largely instrumental, their sets are punctuated by Kirsty’s unique “singing” style, screaming into the bell of her saxophone which itself goes through a bevy of effects pedals. Intensely independent in everything they do, the duo write, perform and record everything themselves and have released two acclaimed albums on their own label, GRUPO: The Living Man (2017) and Pray For Party Dozen (2020).

These two albums have seen word of the group slowly spread around the globe. Tracks from Pray For Party Dozen gained early support from the likes of Henry Rollins at KCRW in the US and Tom Ravenscroft at BBC 6 Music in the UK. But like so many other bands, Party Dozen found their plans to tour these places halted by the COVID-19 pandemic. Lockdown did present other opportunities however, including an incredible performance of album track “Play The Truth”, recorded in an empty Sydney Opera House. Two songs from the album also found themselves remixed: “Auto Loser” and “Scheiße Kunst” by Mogwai and Peaking Lights respectively, something that arguably might not have happened had those musicians been recording and touring as they would in more normal times.

2022 will see the return of Party Dozen, first in April with the 7” release Fat Hans Gone Mad for Sub Pop’s Singles Club, and then with their third album, The Real Work, with a new label partner for the world outside Australia and New Zealand in New York’s Temporary Residence Ltd.

The song which both prompted and inspired the recording of The Real Work was also a product of lockdown. In January 2021 the group were invited to Australia’s brand new Sydney Art Gallery Phoenix Central Park. The gallery, a stunning new building in the city’s Chippendale area, owned by philanthropist Judith Neilson, had opened its doors for the first time mere days before lockdown. Faced with letting the building – which would later win Cultural Building of The Year 2021 at the World Architectural Festival – sit empty, the Neilson family decided to select a handful of local artists of all disciplines, and to document them performing at various spots around the gallery. Filmed by award-winning production company Entropico, Party Dozen’s performance of a new track, “The Worker”, was so blistering that the live take from the gallery shoot was released as a single, and remains untouched now on the album.

The band said of “The Worker” at the time, “After postponing our Pray For Party Dozen album tour for almost 12 months, “The Worker” felt like part cathartic outlay of locked-down frustrations, and part jubilation… finally picking up our tools and getting back to work.” When the two came together again later in the year, they continued that theme in the sessions for what would become their third album, “The album is loosely themed around the idea of work and we like thinking about our instruments as tools. Not so much considering work as a chore, but more like an opportunity to gain from effort. The process of working on Party Dozen is not very serious. There’s a playfulness and joy in the studio when we create.”

While the duo are driven by a desire to explore new musical territory, their process from album to album doesn’t change much, “When we’re writing, we begin with loop-making sessions. A lot of these don’t pass the first stage and when this happens we move on to something else pretty quickly. Once we settle on a loop we both like, we jam and see what happens. When we’re recording, we might do 2 or 3 takes and pick the best one, and that becomes the track. We record, mix and master everything from our studio in Marrickville. We try not to replicate the same vibe twice. Each record is a compilation of ideas we think we haven’t explored as a band. Every time we come to jam new songs we consider how the jam might fit into our catalogue as a whole.”

The Real Work succeeds in exploring new directions but also features some familiar PD touches. Opener “The Iron Boot” is a classic Party Dozen opener. “We always like to start records with a bang. It’s always a discussion of how many big songs we can fit on the start of the album. We call it stacking the front.”

The front is stacked. Track 2, “Macca The Mutt” is notable for being the first time someone other than Kirsty or Jonathan appears on a Party Dozen track. But for a group so clearly influenced by The Birthday Party, exceptions can be made. During the song’s recording they felt the end section was missing something, specifically Nick Cave ad-libbing. A long-shot cold call email was sent to Cave’s management, almost as a joke and certainly with no expectation. Somehow, one Friday evening two weeks later, they received an email with a phone number for Nick, suggesting they call him. By the time Jonathan got out of bed on Saturday morning, Cave had been to the studio, recorded a bunch of takes and delivered them to the PD inbox. Clearly it’s thrilling for a young band to receive approval and validation from someone whose music has been such an influence on them, but more than anything else it proved they were right; all “Macca The Mutt” had been missing was Nick Cave, and it wasn’t missing him anymore.

Elsewhere on the album, Party Dozen experiment with altogether dancier loops; the groovy no-wave of “Fruits Of Labour” pulses spasmodically while “The Big Quit” borrows the swagger from Henry Mancini’s “Peter Gunn” theme and returns it dirty, torn and smelling of some unidentifiable liquid. “Balance” is an all-out aural assault: all feedback, drone and brutal drum fill pushing the needle well beyond the red. “Earthly Times” is centred around an Alice Coltrane-esque bass loop, tension building as it circles like a shark before launching lightning quick attacks of razor-sharp wah-wah. “Major Beef” is a psychedelic playground nightmare.

Perhaps the most surprising moment on The Real Work though comes with closing track, “Risky Behaviour”. It’s the sound of the group at their most cinematic, and possibly their most earnest and beautiful. Part Gainsbourg and part Axelrod, it finishes the record and leaves you in an entirely different place from where you began. You could never tell where this journey was going to take you but you certainly didn’t expect this. “We always feel like we need to cover a wide spectrum with a record so softer songs are always welcome as relief from all the noise and chaos. “Risky Behaviour” is kind of the soft send off in the night time of the album. We felt like it just didn’t fit anywhere else on the record.” 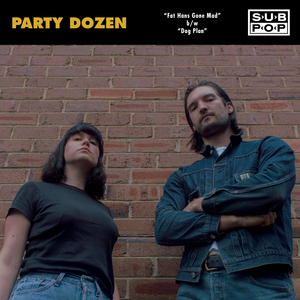