Subtlety is often an underrated quality. That’s partly why Papercuts’ new album, Fading Parade band’s fourth overall, and first for Sub Pop—is such a breath of fresh air. Papercuts prinicipal Jason Robert Quever’s beautiful songwriting is thoughtful, quietly evocative and simultaneously ambitious. This is dream pop of the highest order, but unlike a lot of contemporary bands that fall under the same sonic umbrella, Papercuts isn’t trying to emulate shoegaze heavy hitters from yesteryear. Instead, Quever’s embraced a gentler, more sophisticated approach to presenting pop music that’s steeped in atmosphere.

“There was so much aggressive music when I was younger, and I just felt like trying something different,” says Quever. “I don’t want to hit people over the head. That’s just not who I am. I don’t necessarily like to be the center of attention.”

Quever may not want to be the focal point at social gatherings, but make no mistake about who is in control of Papercuts. His lush, layered recordings sound like they were made by what’s commonly referred to as a “band,” but Quever is always the one pulling the strings, whether he’s literally doing it on his guitar, producing, or writing. (It doesn’t hurt that he’s a whiz on a bevy of instruments, including organ and drums.) Though Quever continues to refer to Papercuts as a band, he’s finally getting comfortable with the idea of being a lone arranger.

“I’ve always tried to get away from being the bedroom guy, but then lately I’ve been realizing sometimes that’s worthwhile,” he says. “Maybe that’s the school I’m from: trying to make interesting records any way you can, with whoever might be around.”

Papercuts’ first three albums—2004’s Mockingbird, 2007’s Can’t Go Back, and 2009’s You Can Have What You Want—were recorded in San Francisco by Quever at his home studio, Pan American Recording, where he’s worked with artists like Port O’Brien, Beach House, Cass McCombs, Still Flyin’, and The Skygreen Leopards. Pan American was partially used to make Fading Parade, but for the first time Quever also left his comfort zone by heading to The Hangar in Sacramento and handing over some of the recording reins to Thom Monahan (Beachwood Sparks, Au Revoir Simone, Vetiver, Tussle). It turned out to be a great match, and with Monahan handling the technical details, as well as his live band helping out, Quever avoided sweating the small stuff and was able to spend more time being a performer and arranger.

“I didn’t have a heart attack by the end,” says Quever. “It was actually enjoyable the whole way through, and I’m excited to play these songs live instead of feeling, ‘God, I never want to look at a guitar again.’”

Crafted over the course of several months, Fading Parade is meticulously designed pop music, with a fully developed sense of space and a sturdy wall of sound. With the aid of strings, autoharp, Mellotron, Moogs, 12-string acoustic guitars, piano, Echoplexes, analog tape and digital recording, Fading Parade is wide-ranging and adventurous, through the up-tempo jangle of “Do You Really Wanna Know,” the soaring and resonant “Do What You Will,” the moody swirl of “I’ll See You Later I Guess,” the folky, piano-driven “Winter Daze,” and on. Imagine Belle & Sebastian teaming up with Slowdive and recording with Phil Spector back when he was killing it in the studio rather than, well, you know. It’s also Papercuts’ liveliest record, due in no small part to the fact that many of the songs were road-tested before being recorded, and Quever found himself writing with live performance in mind. He also got help in the studio from the guys who have made up Papercuts’ live band over the past two years: David Enos (keyboard and autoharp), Graham Hill (drums), and Frankie Koeller (bass).

“I just knew that we wanted a big sound, like drums that really rang out a long time,” says Quever. “I’d been playing more with a band, so I just thought about trying to get it as dynamic as possible, in a way that’s hard to do recording at home.”

For Quever, both personally and musically, everything seems to be falling into place, and there is an open quality that can be felt throughout Fading Parade. After enduring a difficult childhood that included the death of both of his parents—he credits the four-track he got after his mom died with both helping him cope and inspiring his career—Quever has a record that was fun to make, soon to be released on a label that made taking his ideas into a bigger studio possible. And he even has a band he loves without having to deal with all the usual annoying band stuff. 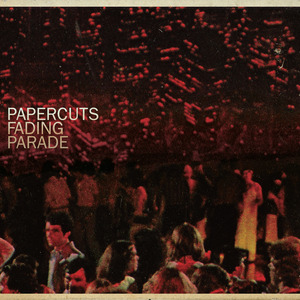 Papercuts Do What You Will 7 inch
See more Papercuts merch