BITS is album number four for Brooklyn’s Oxford Collapse, but it’s a first for them in many ways. Some of those ways will be immediately apparent to those of you who’ve followed their raucous, boyish exploits since their 2006 Sub Pop debut Remember the Night Parties, or from their earlier efforts. Their charming lack of guile, combined with a capable and focused aim towards the better of the ’80s college-rock cognoscenti and Trouser Press favorites, has made for music of a mindset that has found its way into backyards and across rooftops all over the city.

Much of Oxford Collapse’s earlier output reflected an almost preternatural awareness of this mindset and was/is excitable and bounding against prison walls of their own device. BITS corrects for time and experience, and shows a band artistically riding its own peaks. The tension is still present in their three-way interplay (listen to them firing off of each other, squealing out of control at the end of “Back of the Yards”) but the direction and presence in this set is open, flowing against anything they’ve done before. It’s the sound of fun turning into purpose, of a great band writing and playing their best songs, and knowing how great that feels.

Inspired by the ethic of the Minutemen and the sense of tireless work embodied by that trio and the rest of the SST Records roster, Oxford Collapse wrote material beyond what they would need for BITS-—30 songs by their count. Surplus tracks recorded during these sessions went to the “Spike of Bensonhurst” 7" for Flameshovel, the Hann-Byrd 12" for Comedy Minus One, and were taken on tour this year in the U.S. and in England with We Are Scientists and Frightened Rabbit.

Strategies to create this much material required a step back from the creative process. They played what they felt. Time was precious, over-thinking was not, and the boys tore through their influences. “The economy has been bad,” deflects Michael Pace, guitarist and vocalist, “so we decided to write more songs. Shorter ones, too, because we’ve never released a record without one really long track in there, and we didn’t think about doing that this time.”

Drummer Dan Fetherston, who takes part in writing the band’s lyrics along with Pace and bassist Adam Rizer, concurs. “A lot of these songs didn’t have words. We were standing outside of the studio figuring out a lot of these lyrics right before we recorded them.” The spontaneity of these sessions led to an off-handedly relaxed focus on what was being sung, and the subjects in question trade sincerity for encryption.

Recording was handled in chunks of time over 2007 with Eric Emm at the Brothers Studios, and Chad Matheny (who records under the name Emperor X) in spaces all over town. They’re in their element, working hard, bailing out ricochet-biscuit melodies and big sing-along choruses, but still able to craft beach-bum campfire pop strum (“Featherbeds”) and delicate string duets (“A Wedding”) amid all the “straight-for-the-jangular” attacks inside.

This is the new Oxford Collapse, as a band and as a record: straightforward; memorable; mature, but not necessarily grown-up; just better. And better’s all they needed to canonize themselves in the ranks of bands doing something to connect the past to the present. It’s all heart and ingenuity, the joyous racket that connects C86 pop to the present, made by three guys who are realizing that they can be mayors. 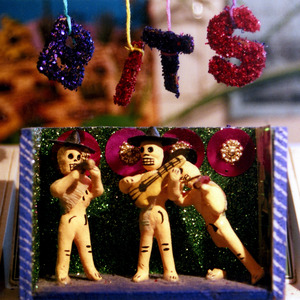