Thank you for what we are presuming to be your interest in the band Obits. They are a four-piece band who currently live in Brooklyn, NY, and whose music is most probably considered an occupant of the rock music genre, with more specific reconnaissance in the areas of garage, punk, surf, surf-punk, and garage-punk (though, not surf-garage). On this new album, they’ve also covered a song (“Besetchet”) from volume 23 of the excellent Ethiopiques series; and so much for tidy categorization. The album for which this clumsy biographical dispatch has been prepared is entitled Bed & Bugs and it is the third full-length album by Obits, following their 2011 album Moody, Standard and Poor, which itself followed their 2009 album I Blame You, which we in the professional music industry refer to as the band’s “debut” (which is French for “LP1”). Bed & Bugs was recorded somewhere in Arlington, VA at an unnamed recording studio, simply and rather unhelpfully described as “upstairs.” This recording was accomplished by Nikhil Ranade, and the resulting songs were later mixed, variously, by this same Nikhil Ranade as well as Eli Janney and Geoff Sanoff.

Critical response to the aforementioned Obits albums has included such adjectives as: “spacious” and “jumpy” from The New York Times; “propulsive,” “sandpapery” and “sweaty” from Pitchfork; “powerfully wiry” and “declamatory” from SPIN; “driving” and “really good” from Dusted. Descriptive responses from actual, verifiable employees here at Sub Pop Records range from “fidgety,” “tight” and “loose” (Warehouse Manager Mark Arm), to “picaresque,” “pithy” and “cogent” (International Sales and Distribution Honcho Gabe Carter), to “skronkeratchity” and “ffffromp-ful” (from our borderline incomprehensible Direct Sales Commander (Western Quadrant) Dean Whitmore). We look forward to new and inventive adjectives with the release of Bed & Bugs.

On listening to Bed & Bugs, the discerning listener may well note more than a passing similarity to such bands as Hot Snakes, Edsel, Drive Like Jehu, Girls Against Boys, Pitchfork, possibly Television or the Wipers. This is un-coincidental! With the exception of those last two, Obits share members with all of those bands.

As is the habit of many of the best contemporary rock bands, Obits will perform live with the release of Bed & Bugs, both domestically and internationally. For instance, they recently performed in the building in Warsaw that Stalin gave to Poland.

Less flippantly: There are scenes and there are connections; trending hashtags and experiences. It’s cool, these are not either/or propositions and there’s no need to postulate any us vs. any them, the kids today and back in the day. Much of what’s best about any music, all art, across genres, within and beyond the latest craze, is the way it speaks to some definition of “us.” Proving, as Obits sing (or “jumpily declaim”?) in Bed & Bugs’ “Receptor,” that “You ain’t the world’s lone receptor,” is deeply valuable. Because we’re all headed to the same place: me today, you tomorrow. And, in that waning interstitial space, let’s go ahead and have what we want. No need to choose: make ours both Bed & Bugs.

With all sincerity and not,
Sub Pop Records of Seattle, WA 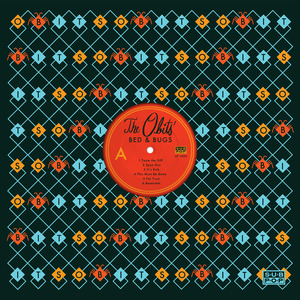