As the title An Object suggests, these eleven tracks, produced by No Age and their long-time collaborator Facundo Bermudez, who recorded tracks on their Weirdo Rippers LP (2007) and toured with the band in support of Everything in Between (2010), are meant to be grasped, not simply heard. Whether in the fine grit of Randall’s sandpaper guitar scrapes on “Defector/ed,” or Spunt’s percussive stomp and crack on “Circling with Dizzy” and “An Impression,” created largely through the direct manipulation of contact mics, these are songs that pivot on the sheer materiality of music-making. Spunt’s creative deployment of bass guitar accented through a modified speaker on the beautifully catchy “I Won’t Be Your Generator” is a case in point: even at its most lyrical An Object incorporates the process of its creation into the very backbone of the songs.

Still, this is hardly a work of avant-garde noise music or l’art concret. These songs are hummable, political, and, on tracks like, “No Ground,” “C’mon, Stimmung,” and “Lock Box” (in which Spunt’s vocals bear a passing resemblance to the Ramones), recognizably punk. Elsewhere, on tracks like “Commerce, Comment, Commence” and “A Ceiling Dreams of a Floor,” No Age take this kernel and transform it, literally blurring the sound and bathing the album in a swirl of layered guitar and a bright haze of static alongside an ethereal, haunting vocal that conjures shoegaze as much as hardcore. What these two approaches share is an understanding of sound as a material, something to be shaped, handled, and worked over. It is an aesthetic in which the relationships between guitar, percussion, and vocals—as well as those between rhythm and melody—become relationships between things.

These relationships are diagrammed into An Object at every level. In collaboration with close friend and Grammy-nominated designer Brian Roettinger ( 5 EPs, Nouns, Losing Feeling, Everything in Between) the band has performed, recorded, produced, and prepared and assembled the entirety of the physical packaging of An Object, including jackets, inserts and labels, taking on the roll of manufacturer, artist and musician until the roles trip on themselves and individual parts lose their distinct meanings, demanding to be considered as a whole. It is this sense of the total work of art—call it the DIY gestamtkunstwerk— that underlines An Object as the culmination of two years of touring, writing and performing, finding No Age moving into new terrain at the height of their powers. 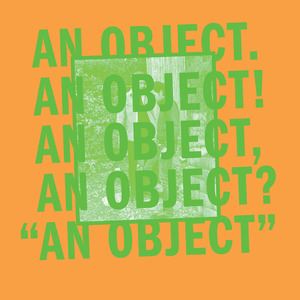