On September 19, 1990, perhaps with an eye on the daily news reports of US forces massing in Saudi Arabia in preparation for an assault on Iraq, Mark Arm recorded a version of Bob Dylan’s “Masters of War,” at Reciprocal Recording studio in Seattle. Mudhoney fans might have been surprised to learn that the voice of such mindblown anthems to oblivion as “If I Think” and “In ‘n’ Out of Grace,” was now taking on the definitive antiwar song. The times were indeed a-changin’ – both for the world, and for Mudhoney.

“My idea was, why don’t we go check out Egg Studios, go in there for a day and record a bunch of punk covers, and see what it sounds like. I called Conrad, and said, ‘This is Steve from Mudhoney. We want to come in there and record with you.’ He started laughing, and just said, ‘Why?!’ I figured that bode well for Conrad!”

Over a couple of days at Egg in October, Mudhoney celebrated their love for punk of all shapes and nationalities, cutting versions of The Adolescents’ “Who Is Who,” Angry Samoans’ “You Stupid Asshole,” The Damned’s “Stab Yor Back,” Devo’s “Gut Feeling,” The Milkshakes’ “She’s Just 15,” and Void’s “Dehumanized.” Loose plans to release a punk covers album were abandoned when it emerged Guns N’Roses were toying with a similar notion – ironically, as GN’R’s The Spaghetti Incident wouldn’t appear until 1993, and turned out more a heavy rock smorgasbord than Mudhoney’s lean’n’lethal concept. Nonetheless the exercise was vindicated, as Uno’s funky basement joint both felt and sounded right.

In support of their new Morning in America EP, Mudhoney announces 2020 North American tour dates, including some co-headlining shows with Meat Puppets 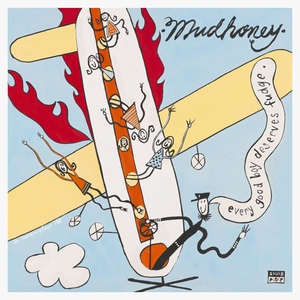