The invocation of classic west coast psychedelia that permeates Morgan Delt’s Sub Pop debut LP feels like a continuous sunrise, never concealing its influences yet perfectly putting its songs through a gauzy lens that blurs and obscures. Is such a thing even possible after witnessing umpteen reverb-jockeys creating their own take on the genre? Can anything truly different be done in the realm of being both original and reverent, wearing favorite records and artists’ moves on one’s sleeve? Definitely the case with our man here. After releasing a 6-song cassette in 2013 followed by a full length for the Trouble In Mind label, the California native now fine-tunes his sound world outwardly rather than honing in on a specific trajectory, allowing all of said influences to coexist together in a unique yet undoubtedly Californian vision.

The resulting 10-song collection, performed entirely by Delt, recorded in his Topanga Canyon studio and then mastered by JJ Golden, is a home-fi construction with a more subtle, braintickling character than its predecessor, and somewhat reflects a realist take on the flower power fantasy of 1967. Doused in echo and haze, slow chords lap in like Pacific waves, flanked by gentle whispers of multi-tracked, cooing vox, phased guitars and fuzz that calmly surrounds the listener’s head less than it jabs at the cortex. Opener “I Don’t Wanna See What’s Happening Outside” is almost the sharpest-sounding number on the record with jittery, choogling guitar that makes its dry solo run upfront, appearing mid-song out of a fog. The sense of home experimentation amidst the lo-fidelity and oozy layers of vocals almost brings to mind Christine McVie’s lush pacification of Lindsey Buckingham’s deliberate New Wave pot-stirring on Tusk, but unlike that record, Delt’s futurism fog can’t help but nod to Sunset acid of days of yore. One doesn’t need to listen close to extract healthy doses of Notorious Byrd Brothers, Curt Boettcher, Terry Riley, and Buffalo Springfield in the stew with a solid line of fluttery electronics that fizzle in and out of the floaty arrangements. “Sun Powers” hits the deck like a lift-off from a ‘70s UK sci-fi TV show, sunny tremolo zipping in circles around warm Zombies-like vocals coming out of some kinda cave, lovely melodies and words overriding any turbulence or background FX.

The great thing about Delt’s approach to such history is (and sorry to sound harsh) that unlike too many of his so-called L.A. psych-rock peers, there’s no costume involved, no application of a conjured identity to match a specific image. He’s no psychedelic Civil War re-enactor, so to speak. It’s subtle and tactful revisionism without using psychedelia as a crutch/easy marketing tool and letting the sounds come out and make their own case. So many ideas and levels of activity move around the ascents and descents of songs like “Age of the Birdman” (an ode to the survivors of Easter Island’s environmental collapse) and the flowing “Another Person” that you’re just asked to lay down and let it all cover you over rather than contemplate much else. Yet there’s a certain acknowledgement that the beauty must be preserved by proactive consciousness/action in the world.

It takes a creative mind to hone in on a song like “Escape Capsule” without wearing out well-trodden use of tablas and electric drones. More often than not it all traditionally can fall into Beatles or Spacemen 3 terrain, but on this song Delt can transport what would normally be a dark-n-druggy blanket into a much more optimistic and friendly listening experience. Despite his voice being channelled through hallucinatory effects, it’s warm and inviting, projecting a sense of hope (particularly in “Some Sunsick Day,” which evokes the hopeful “We’ll Meet Again” as the world explodes at the end of Dr. Strangelove, later covered by the Byrds). It’s more or less just an invite to watch the sun rise too. 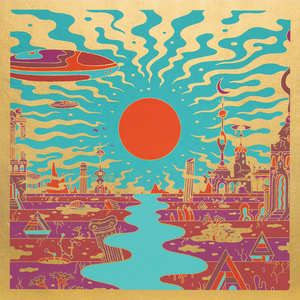