Mister Heavenly is… comprised of indie rock veterans Nick Thorburn (Islands/The Unicorns), Ryan Kattner (Man Man), and Joe Plummer (Modest Mouse). Their mutual admiration society was in place before Mister Heavenly took shape. Modest Mouse and Man Man toured together repeatedly, starting in 2007. Nick and Ryan met in Philadelphia in the final days of The Unicorns, or maybe the early days of Islands. They’re not sure, but they hit it off instantly. They bonded over a lot of things—music, cough syrup, being signed to the same label—but it was one of their fundamental differences that inspired Ryan aesthetically. “I always thought that the two of our voices together would make an interesting contrast since they occupy very distinct ends of the vocal spectrum,” he says.

Mister Heavenly is… a trio of men who love dogs.

Mister Heavenly is… at the forefront of “doom wop,” which is a state of mind rather than a nitpicky micro-genre. It is born from a shared love of 1950s vocal-based R&B classics by ensembles like the Penguins, the Platters, and the Moonglows, and also a fascination with ill-fated romance. The album title, Out of Love, is both a nod to passion as a motivator (“I did it out of love”) and also the absence or dissolution of same (“She fell out of love with me”): two seminal lyrical themes in the annals of pop music. As it happens, the actual Mister Heavenly song “Doom Wop” owes as much to grunge and art-punk as it does ’50s pop. When you mint your own style you can take such liberties.

Mister Heavenly is… a songwriting collaboration, a creative push-and-pull. Sometimes Nick wrote a chorus, Ryan provided the verse, and then they hammered out the final product together. They only had three ground rules: a) Keep it short; b) Keep it simple; and c) Keep it rooted in some semblance—harmonic, lyrical—of classic doo-wop. “I’d never had the opportunity to bounce songs off another person, especially one who I trusted would carry his weight, and it was very refreshing,” admits Ryan.

Mister Heavenly is… pretty sure the ghost of Elvis Presley was hanging around Bear Creek Studio in Woodinville, WA, where they recorded the album with Ryan Hadlock (The Gossip, Ra Ra Riot, Love of Diagrams). Either that or somebody plugged in a discreet peanut-butter-and-banana-scented air freshener before they arrived. Regardless, the King would’ve appreciated that Mister Heavenly does things the old-fashioned way, and recorded live to tape. The band recorded and mixed the entire album in 12 days.

Mister Heavenly is… open to chance. Initially, the participants weren’t even sure their collaboration would be a band, per se. “We floated around getting different people to sing on each song, or making only one song, or making no songs at all but continuing to talk about Mister Heavenly as though it were a real thing with its own genre,” discloses Nick. Dubious of signing on for all the rigmarole a full-time band entails, they started with modest goals: Make one seven-inch single, maybe just post a couple songs on the internet. But after a couple of songwriting sessions, Nick and Ryan had enough material for several 45s, perhaps even a whole album. Nick and Joe had never met before Joe flew out to rehearse with them in a Brooklyn basement, but they both took a what-the-hell attitude. “Everything about how this band came together kind of falls under that category,” says Ryan.

Mister Heavenly is… very excited by the prospect of their music being used in a big-screen, teen romantic comedy, which seems appropriate for a band that describes their music as “post-apocalyptic Valley Girl meets the American Graffiti soundtrack.”

Mister Heavenly is… greater than the sum of its parts. From the outset, the participants realized they had something unique on their hands. “The songs were dark and strange but oddly addictive,” says Nick. “They really sounded like a mash-up of our styles but at the same time a wholly new entity.” This many-headed beast produced beguiling novelties such as the percussive rock-at-a-cultural-remove of “Pineapple Girl,” a mix of sweet and unsavory inspired by the unlikely correspondence between 10 year-old Michigan resident Sarah York and ruthless Panamanian dictator Manuel Noriega, and the swelling synth-pop/surf-rock fusion of “Harm You.” “Reggae Pie” started out when Ryan attempted to pen a ditty in the style of American R&B singer Gino Washington but somehow migrated into burbling dub territory… except for the midsection contributed by Thorburn, which suggests a more-than-passing familiarity with Paul McCartney and Wings.

Mister Heavenly is… “pretty open and abstracted, and its future is undetermined, which is the way we all like it.”

Mister Heavenly is… excited to hear what you think. 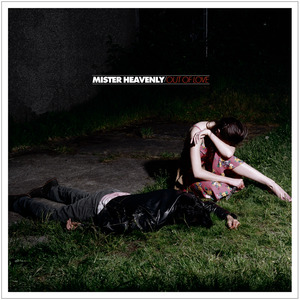