“I rhyme to see myself, to set the darkness echoing,” writes the Nobel Laureate Seamus Heaney of his solitary profession in his poem “Personal Helicon.”

These words always come to mind when listening to the music of Mirel Wagner. There is a defiant air of unflinching bravery in her carefully chosen words and the skeletal chords of her acoustic guitar. Her songs are like smooth, polished black pebbles, thrown into a cold bottomless pond, drops of life that set the darkness rippling.

Her acoustic balladry is as far as you’ll get from clichéd coffee house folk, having more to do with the primeval darkness of Swans than the folksy bonhomie of Bob Dylan.

Her background couldn’t be more normal: a relatively sheltered childhood in the suburbs of Helsinki. Wagner would spend her teenage years rummaging around the blues section of her local library, fumbling around with her brother’s acoustic guitar.

Wagner is wary of speaking of her Ethiopian origins (she was adopted at 1 ½ years of age) and insists that she is Finnish. And so she is. Her art is all the more astonishing considering this cultural context, all the more shocking in its strangeness because it stems from something so normal.

Her self-titled debut is still causing ripples today. Its nine songs distill the very essence of darkness, are the hollowed-out bare bones of the blues. They seem ancient and worn, old beyond their years, chillingly frank in their brutal honesty. It is an incredible set of songs, a record so potentially faultless that it would seem impossible to better. Written when she was still in her teens, like the child-poet Rimbaud, she seemed to channel something much bigger than her frail frame would imply, the kind of fountain that dries up once you drink from it too thirstily, the kind of sunlight that you only walk in once.

For this very reason, I’ve been dreading her second record. “Oh me too!” exclaims Wagner. “It’s just the classic story: I had years to write and polish that set of songs, and now I’ve been so busy touring and performing that writing new songs has been hard.”

Have no fear, it’s all here.

Her forthcoming album, When the Cellar Children See the Light of Day, according to Wagner, is “more of the same.” And lo and behold, it is: a better-recorded, better-written, better-sung, deeper version of the first.

“People keep asking me to somehow define this record in context with the first. I started using a plectrum, but maybe that’s not really it, either. It’s just ‘more,’ in some way. ‘One louder,’ if you will.”

When the Cellar Children See the Light of Day was recorded at Shark Reef Studios in Hailuoto by electronic music producer Vladislav Delay (Luomo, Uusitalo). Vladislav fleshes out Wagner’s sound while keeping her winning formula intact, with subtle production touches that make the album sound vast and huge.

“Aki Roukala (Wagner’s manager) knew Vladislav and suggested we work together. It was really good, actually. I’m really glad we did. It was very relaxed and intimate, just the two of us in the studio. Vladislav listened to what I had to say rather than try to impose something on me. He only suggested something once, and when we tried it out, it worked perfectly.”

When the Cellar Children See the Light of Day is an impressive set of songs, uniform and cohesive. Wagner wrote the majority of these songs up on the peninsula of Hailuoto in northern Finland, in an old log cabin next to Roukala’s family home. The isolation and relative starkness of the place (no central heating, no electricity) helped bring out the songs. During her month-long exile, Wagner’s only companion was a solitary mouse, with which she shared her food.

The ominous counting of opener “1-2-3-4” signals the arrival of a new, more commanding voice. No lament, this song rather taunts and pushes the envelope, seeming to revel in a kind of sadistic pleasure in recounting things that live below the floorboards and in darkened corners. There is something foreboding implied in the process of counting, as if a prelude to something unspeakable.

The second song, “The Dirt,” which is reminiscent of Mark Lanegan, comes from that same vast, empty and dusty desert, from which he walks into town. It broadens Wagner’s palette by introducing the solitary howl of an electric slide guitar after the payoff line “you’ll be in the dirt / you’ll be the dirt” comes around the first time.

That line, as perfect as it is merciless, recalls the wheel of Greek tragedy or Shakespeare, crushing in its emotionless realization of the facts, while taking pleasure in charting your inevitable downfall. The dirt swallows you until you become it. “Ashes to ashes, dust to dust,” as the Good Book says.

The line is also quintessential Wagner in the sense that it changes the tone of the original by altering just a single word. The last line draws blood. It’s a classic blues moment.

Vladislav also enlisted the talents of his friend, Academy and Grammy award-winning Scottish composer Craig Armstrong, who played bowed cello on the song “Ellipsis” and piano on the album closer, ‘Goodnight.” He is the only other musician on the album.

“Ellipsis” has that endless vastness of Nick Cave’s most desolate ballads. Its notes echo to the horizons. And “Goodnight” introduces a meandering piano line reminiscent of Tindersticks. It traces the melody absentmindedly like you’d trace the outline of the back of a sleeping lover, humming along as it goes strolling down the road.

When the Cellar Children See the Light of Day  is solely Wagner’s vision. At times it is playful, at times chillingly emotionless - Wagner is difficult to pin down. Her vocals are louder than ever on this new record, with the whisper of yesteryear drawing breath and huffing and puffing your house down. From under the floorboards, from the darkness that gathers in the corners of your room, and mind. 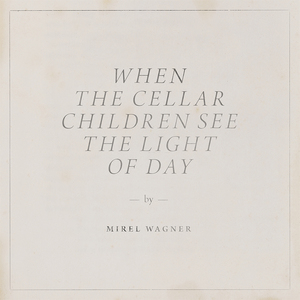 When the Cellar Children See the Light of Day