In the depths of southern Ontario, nestled between Canada’s most dangerous super-highway and the banks of the laconic, ironically-named Speed River, there is a mid-size town called Guelph, also known as The Royal City. More recently, because few people can recall the historic reasons for that Victorian-era subtitle, and because it is more appropriately musical than royal in the twenty-first century anyway, Guelph was rechristened as “The City of Music.” And it is, in fact, a community that takes its music to heart, having sent forward any number of its native sons and daughters in indie band formation. It is also the base of the Hillside Festival, another local effort with international effects, most notably for introducing music lovers to early versions of such acts as Broken Social Scene and The Arcade Fire.

It was in this strangely creative setting, or more accurately on its somewhat more mundane south-end suburban fringe, that Memoryhouse was conceptualized some five years ago.

Memoryhouse didn’t actually set out to be a band. It took form as a collaborative project meant to serve as an artistic outlet for composer Evan Abeele and photographer Denise Nouvion. Evan, a dedicated student of classical music and a pop-music encyclopedist, intended Memoryhouse to be a multimedia art project, pairing his instrumental compositions with Denise’s photographs and short films. Combining their musical and visual artwork seemed the most promising, and least unhealthy, strategy for battling archetypal adolescent angst worsened by the paralyzing effects of Canadian winter. What they wanted was to test ways to blur the boundaries between genres, to weave a synthesis of music and photography. As Denise explains their collaborative cross-media process, “we start with photos that we want to write around, to give us some kind of aesthetic grounding.”

“When people think of music today, they try to compartmentalize it into different genres,” Evan observes. “I think the sound we have right now fits ‘out’ of time, but, obviously, is still ‘in’ our time. It’s something that could have happened many years ago, but it also sounds contemporary.”

Memory, then, both in terms of looking back and as embedded in contemporary culture, is the basis of the Memoryhouse project. The band’s name itself commemorates the work of German neo-classical composer/artist Max Richter, specifically his 2001 album Memoryhouse, as well as the watershed impact of that album on the Abeele-Nouvion project. As Evan explained in an interview with Pitchfork, “for me, in my musical development, there was a ‘before Memoryhouse’ and an ‘after Memoryhouse’…Hearing that fundamentally changed the way I approached composition. I just wanted to pay tribute to that. I wanted to have that to ground us, wherever we took our own music.”

Where Evan and Denise took their own music was a quick distance from where they began, recording, refining, and conceptualizing their aural-visual collage in the bedroom of a suburban family home. Individually and together, they experimented with themes, lyrics and multiple layers of instrumentation, with Nouvion’s soft, ethereal voice anchoring the frozen textures of Abeele’s compositions with frank sentimentality—a uniqure approach towards humanizing the electro-pop compositions they were creating.

Their first extended stint as performers made for a huge learning curve, but after a few extended tours in Europe and the United States, they were soon signed by Seattle’s legendary Sub Pop Records. And in September 2011 Memoryhouse released an improved version of their original home-recorded EP The Years on Sub Pop.

When it came time to record their debut full-length album, Memoryhouse knew exactly what they wanted. “I think there is an unfortunate tendency for bands to rush their first album…jumping into a studio without getting a chance to fully develop their voice,” states Abeele. Memoryhouse, however, took their time, touring the songs that would eventually comprise their debut full-length for a full two years. “The album is a big leap for us, but it’s also a completely organic one,” posits Nouvion. The 10-track album, produced by Abeele, with assistance from friend, collaborator, and occasional Memoryhouse bassist Barzin Hassani Rad, finds Memoryhouse heading toward a new clarity in composition as well as sound; a more organic direction for artists who are, in their own words, transitioning from a “bedroom recording project” into a fully realized band. Even their range of influences has expanded to include such acts as Emmylou Harris, Dusty Springfield and Fleetwood Mac. “These vocalists, Emmylou, Stevie Nicks…they have undeniable warmth to them, but also a sense of identity, or ‘character’,” says Abeele. Nouvion’s voice has never been more present than on the new album, which finds her stepping away from Memoryhouse’s past reverbed sound in favor of a more upfront, and intimate vocal affectation. They half-seriously refer to their new sound as “Taylor Swift with Built to Spill as her backing band.”

The new album is titled The Slideshow Effect. The title speaks to what hasn’t changed for Memoryhouse: their continuing interest in the synthesis of the aural and the visual. It refers to the photographic/cinematic technique of zooming and panning to animate still images, often used in documentary film making to give movement to archival photographs. The Slideshow Effect will be released on Sub Pop Records on February 28, 2012. 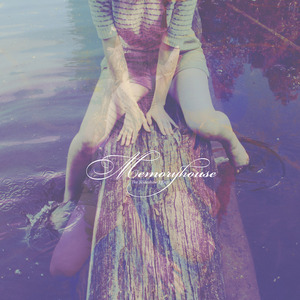