Matthew “Doc” Dunn is a revered name in underground music circles. From his hometown of Toronto, the polymath multi-instrumentalist has produced a prolific body of work spanning solo releases and collaborations with Jennifer Castle, Kevin Morby, Sunburned Hand of the Man, Woods, and many more. As a member of Matt Valentine and Erika Elder’s (MV & EE) band The Golden Road, he has toured the globe while appearing on countless recordings. This led to the formation of Dunn’s eight-piece ensemble, The Cosmic Range (featuring members from projects as diverse as Lido Pimienta, Sandro Perri, and John Zorn), who earned critical acclaim as U.S. Girls’ backing band on her 2018 album, In A Poem Unlimited.

While he has long been celebrated for his instrumental virtuosity, Dunn’s parallel talents as a singer-songwriter were revealed on his recent series of solo albums. Lightbourn (2018), Some Horses Run (2018), Upper Canada Blues (2019) and Rain, Rain, Rain (2020) were all released on Dunn’s home label, Cosmic Range Records. These gorgeously introspective collections of love songs and laments have been hailed as “beguiling” (Pitchfork), “scorching” (Aquarium Drunkard) and “cosmically tuned” (Dusted).

Following in the giant footsteps of Prince or Todd Rundgren, each of Dunn’s solo releases spotlight an astonishing one-man band performance on a studio’s worth of instruments: six and 12-string guitars, pedal steel, drums, bass, Hammond organ, shimmering vibraphone, and more. All four of Dunn’s albums in this quadrilogy were crafted with the Midas Touch of producer Jeff McMurrich, whose credits include acclaimed releases by the Constantines, the Highest Order, and Rockets Red Glare.

For his entry in the legendary Sub Pop Singles Club, Dunn contributes a spellbinding pair of tunes with a little help from his friends. “Your Feel” dances into frame with a zigzagging solo from Dinosaur Jr.’s J Mascis and swelling mellotron from producer Asher Gould-Murtaugh, as Dunn’s insistent vocals conjure the pains of longing for a lover’s touch. “Look In” mellows the tempo to a country slow-dance with glistening slide guitar, as Dunn wipes the tears from his eyes and moseys off into the sunset. It won’t be long until he returns to channel his latest experiences into song. 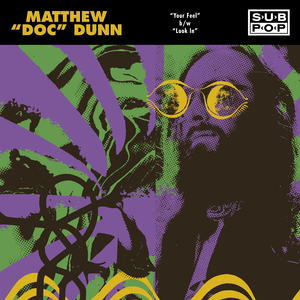