In most aspects of life, it’s usually a good idea to keep your options open, lest you deny yourself the opportunity to explore avenues that might lead to transcendence or, at the very least, a little bit more happiness. But sometimes the best course of action is to find your path and stay focused, which is what Lyla Foy has been doing with her music for the past couple of years. That discovery has led to the creation of her debut album, Mirrors the Sky, due in spring on Sub Pop.

Everything changed for the 25-year-old London songwriter one day in early 2012, when she canceled her evening plans to work on music at home. After years of various collaborations, she instead decided to tap into her creative energy all on her own, and that night her bit of happiness arrived in the form of the gorgeously stripped-down “No Secrets,” which she eventually shared with the world under the moniker WALL.

“When I first started writing for the project, I wanted everything to be really focused on the melodies, but also really simple and minimal,” says Foy. “Just using a lot of bass, and simple drum patterns. So it was completely different to anything I was doing at the time. I wanted to try something new, and that one song happened and I felt like it was the beginning of something.”

The overwhelmingly positive reaction to “No Secrets” confirmed Foy’s suspicion that she’d stumbled onto something pretty special, which inspired her to continue pursuing her less-is-more bedroom beauties. This led to an appearance on Black Cab Sessions, the British Web series where artists perform in the back of a London taxi, and eventually the Black Cab folks formed a label to release WALL’s debut single, “Magazine.” It wasn’t long before the English accolades started pouring in via glowing reviews and radio spins–BBC Radio’s Steve Lamacq went so far as to call “Magazine” his favorite song of the year–and by the end of 2012 she’d made an impression on Pitchfork, which first gave her props for her haunting cover of Karen Dalton’s “Something on Your Mind,” and then continued the love a few months later with a spotlight on the title track from 2013’s Shoestring EP.

But that was then, and this is now, and now Foy has decided to come out from behind her WALL and adorn Mirrors the Sky with her given name. Let’s not make a big deal about the transition: She’s still in the same musical mindset that produced “No Secrets”–in fact, that very same song appears on Mirrors the Sky in a slightly updated form–and she still plays with the guys who have helped bring WALL’s songs to the stage. If anything, listeners can just appreciate the irony that now that she’s fully integrated her bandmates–Oli Deakin (bass, keyboards), Andy Goodall (drums), and Dan Bell (guitar, keyboards)–into her music, she’s ditched the band name for her own. Unlike the WALL recordings, Mirrors the Sky contains plenty of input from the guys.

Speaking of playing live: Now that’s a change worth talking about. Because while Foy’s initial recordings found her literally whispering into the microphone, these days she’s in charge of a project that’s as live as it is recorded, and in turn she’s started writing beyond her headphones.

“A lot of my earlier recordings were so subtle that, unless I had a completely silent room, it was impossible to perform those songs live,” says Foy. “I didn’t want to completely give up on that, but with some of the newer songs I was thinking a bit more like, ‘Yeah, I want to be able to really belt this out–this chorus is going to really kick in and be awesome.’ The songs are a bit bigger, certainly.”

While the vibe on Mirrors the Sky is still restrained romanticism and dreamy drama, Foy had no problem scratching her pop itch on songs like the electro-grooved “I Only” and “Feather Tongue” and the slightly rockier (in a Christine McVie way) “Impossible.” Just try getting those choruses out of your head. Blips and bleeps comfortably mix it up with live drums, and Foy’s keys, guitar, and bass help fill in the rest of the gentle soundscape. Throughout the record, synthesized and organic sounds play off each other’s strengths, giving everything a cool edge while burning with passion.

Like usual, all of the songs started with Foy building layers of beats, keyboards, and vocal melodies in her computer, and she worked quickly to bottle her inspiration at the source, usually completing the skeleton of songs in a few hours.

“Working fast is fun and keeps me excited,” she says, “rather than writing a song and playing it for a few weeks and then getting around to recording it.”

Foy isn’t shy about listing off the myriad artists who have inspired her over the years–everyone from Chuck Berry to Teenage Fanclub to Jenny Lewis to Sister Rosetta Tharpe, not to mention the Karen Dalton cover as well as her subdued take on The Supremes’ “Where Did Our Love Go”–and perhaps it’s those disparate tastes that make her own sound hard to pin down. The mood may feel a little gothy at times, especially when that Robert Smithian guitar emerges during “Someday,” but it would be just as easy to call her a folksinger after listening to the acoustic strum of “Rumour.” She’s received nods to contemporaries like the xx and St. Vincent, but perhaps the most appropriate one is Kate Bush, who, like Foy, is defined more by her angelic voice than a particular genre. And one senses that, like Bush, there’s a badass lurking behind all of the moody magic. Foy’s often abstract lyrics about matters of the heart and beyond only add to the mystery.

“I like to mix personal feelings and experiences with stuff that has nothing to do with me,” she says. “Taking how I feel in certain situations, but telling a little bit more of a story with it–so it’s not my story, but it has my voice in there. I’m a private person, so it doesn’t feel natural to me to just write about my relationship or something like that. I wouldn’t be so obvious with it.”

Foy’s recording setup is simple enough that she’s able to pack it into a car and take it wherever she pleases, and it shouldn’t surprise anyone that some of the pastoral sounds captured on Mirrors the Sky were designed in the English countryside. But perhaps the most significant departure on the album was the one that didn’t take her out of town: Four days at Bella Union’s studios in East London helped solidify all of the sounds she’d been making this past spring and summer.

“Just listening to stuff through a different system was really, really fun,” says Foy, who handled the album’s production and mixing. “There were a few other instruments at the studio that we played around with, like a Rhodes piano and a Mellotron, and we did some finishing touches. It was pretty simple. I didn’t really want to mess with the formula too much. A lot of the albums that I love are a little bit more scratchy and lo-fi, and I certainly didn’t want to lose that.”

For a project that began as a single song in a London bedroom, Lyla Foy’s hypnotically hushed songs have come quite a long way over the past two years, figuratively and literally, as her worldwide deal with Sub Pop will find her spending quality time supporting Mirrors the Sky across the globe. Funny how taking a singular route has led to such a momentous journey. 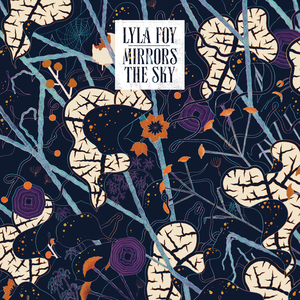