Sam Jayne is a specific breed of classic songwriter: strong-willed, surefooted and unstoppable, particularly when he has the sovereignty to work within his own creative space. Love as Laughter, introduced by Jayne after the 1994 dissolution of Olympia, Washington’s mess-rock poster children Lync, and his work with Beck on the One Foot in the Grave record, found Jayne shoved in small residential spaces with his Tascam 8-track and a canon of brilliant, rough-edged hits. Informed by Thin Lizzy/T-Rex/early Tom Petty instead of his previously thick, sneering Lync work, Jayne’s Love as Laughter songs are brilliantly disheveled pop gems about dirty tricks, miscommunication, regret, bathroom graffiti and misadventure. After years testing the creative freedoms and constraints of professional studio environments on 1999’s Destination 2000 and 2001’s Sea To Shining Sea, Jayne’s return to home-based recording has fostered his most realized, relaxed album yet: Laughter’s Fifth.

Recorded in friend Ben Vehorn’s Newark, Delaware basement over a period of five months in 2004, Laughter’s Fifth simmers with homegrown soul. “It was all done so hobby-style, like we were weekend warriors,” Jayne says of the recording process, which involved long, pressure-free days jamming through the songwriter’s acoustically written compositions until takes were perfectly captured, tweaking each dusty nuance to perfect effect. “You can’t do much about basement reverb, which is great,” Jayne chuckles. Indeed, the forced comfort he and current L/A/L personnel Zeke Howard, Brandon Angle and Miguel Mendez (of Dios) felt infuses each track with gritty, intimate laissez-faire sentiment and live-mic’ed warmth.

One of Love as Laughter’s recurrent thematic calling cards has always been Jayne’s tongue-in-cheek wit, manifesting itself in the form of sly musical allusions and lyrical innuendo. “I Won’t Hurt You,” the album’s amorous heartbroken plea (and a cover originally by the Nuggets-featured West Coast Pop Art Experimental Band), is genius exactly because Jayne’s implication is that he knows that he can, and he likely will. Although he moved from Seattle to New York City in 2001, Jayne’s dusty, no-frills approach to these songs is steeped in his Northwestern past. “Pulsar Radio” was written nearly a decade ago, and “Idol Worship” was previously released as a B-side on a K Records single called “Do You Believe in Alien Boredom?” Laughter’s Fifth is full of the kind of loosely perfect pop songwriting that inspired Doug Martsch to cover “Singing Sores Make Perfect Swords” (off Love as Laughter’s first album, The Greks Bring Gifts) on Built to Spill’s live record, simply titled Live.

After a busy year (most recently, Sam appeared on Saturday Night Live with Modest Mouse and played the prestigious All Tomorrow’s Parties festival accompanied by Dinosaur Jr. frontman J. Mascis) Love as Laughter has returned with the smartest, grittiest solo-rich classic r’n’r record you’ll get in 2K5. 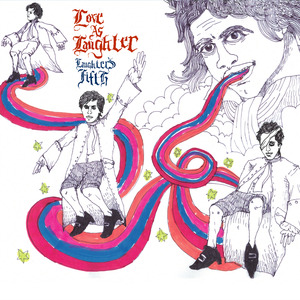