Sometimes you have to rip it up and start again.

It was a tough call for Dee Dee. Dum Dum Girls was her guise for the better part of a decade, an outlet through which she had crafted an instantly identifiable body of work. Demos made in a studio apartment on a nylon string guitar and posted to a Myspace page pricked the ears of various labels including Sub Pop, who Kristin signed with. From there, Dee Dee assembled her group of badass, black-clad cadets and toured the world. Over the course of three albums, four EPs, and a bold brace of singles, Dum Dum Girls morphed from the girl-group-gone-bad moves of their debut album I Will Be (2010), to the plush noir-pop of 2014’s Too True , with its motorik beats and svelte harmonies; a dark heart burning bright.

But sometimes the project you pour your soul into ends up hemming you in. As her music evolved, Dee Dee found that she would be forever refracted through the prism of Dum Dum Girls’ early work: retro-leaning female harmonies, a backdrop of lo-fi, fuzzed-up guitars.

At the top of 2015, she decided to shed her skin, ditching Dee Dee for her real name, Kristin, and adding Kontrol. It was a spontaneous idea – but it resonated with her. As Karen O once counseled her, it may be a leap into the unknown, but little risk means little reward.

Her challenge was to start fresh, and go further back into her relationship with music. Her goal was to sweep all her loves together into one genreless experience.

“The first music I felt was mine was classic 80s pop and 90s R&B, from Tiffany and Debbie Gibson to Janet Jackson and Madonna, to TLC and SWV,” she says. “But for years I was hellbent on the rock’n’roll thing, revering Joan Jett, Patti Smith, Chrissie Hynde” — a rebellion against her classical vocal training — “but with Kristin Kontrol I just wanted to try it all....I thought I’m Kate Bush covering Mariah.”

In her Upper East Side apartment she’d wake up early, slam a coffee, and write till the evening. It was an intense, frustrating but exciting period of experimentation. Writing exclusively on keyboard, Kristin knocked out a song every two to three days. She then fired them off to her trusted sounding board, Richard Gottehrer, who produced records for Blondie and Richard Hell, co-founded Sire Records, and later helmed production on every Dum Dum Girls album. Gottehrer pushed Kristin to try different things like popping over to LA for a couple of trial sessions with Jorge Elbrecht (Ariel Pink, Tamaryn) and Sune Rose Wagner (The Raveonettes), who’d previously produced her. Nothing was quite clicking. “I realized the songs really weren’t there yet,” she admits. Then she caught a Perfume Genius show, which provided a moment of crystallization.

“I understood how far off I was from what I wanted,” says Kristin. “Mike Hadreas’ performance was so well articulated, sonically and visually. It was raw and entertaining, moving, and amusing. I felt like I was seeing the true him and I realized that I’d kept so much of myself out of Dum Dum Girls.”

Refocused and newly inspired, Kristin wrote 62 songs. She whittled them down to a tidy 10 and christened them X-Communicate . X-Communicate was produced by Kurt Feldman (who had produced her Christmas single a few years back) and Andrew Miller (who had played guitar on the first Dum Dum Girls album and joined the band in its last incarnation).

Penning album opener “Show Me” proved to be the real turning point. “It wrote itself in 20 minutes,” she says. “The pre-chorus references Milan Kundera, which has a certain personal significance, but lends itself to the universal. It’s for everyone just trying to get by, burdened with baggage. I kept it direct and positive, and hoped it did the thing that songs sometimes do – state a simple truth in a compelling way: I take you as you are.”

X-Communicate is a surprise to the ears: songs like “Skin Shed” and the title track swirl cosmic disco and dance with a modern production. “White Street” sees Kristin exploring new lyrical territory; “It’s my most narrative song ever: I am, line by line, describing last New Year’s Eve – at least up until a certain point when it becomes more speculative,” she says. “In the first verse I mention that walking to the subway takes ‘the length of four Eno songs’, and my favorite bit is that I later list them in the outro.”

Elsewhere, “Face 2 Face” sets a Rumi concept to heavy percussion. Kristin’s personal highlight, “(Don’t) Wannabe,” loops Enya-esque vocals and features her first reverse guitar solo. “I think it’s the best song I’ve ever written,” she says, laughing. “It’s honest. It makes me sad to listen to it.” The record revealed itself to be about love in its many different forms. “For a moment I thought to kick back against it, but it’s such a substantial part of my life, whether gained or lost, romantic or familial, regarding friendships or that weird passing-in-a-revolving-door thing – all the potentials that you just don’t know anything about.”

Arguably the biggest shift beyond the music is that, as Kristin Kontrol, she tells her stories using a sonic palette splashed with bold pop melodies, her vocals showcasing a range hitherto unexplored. The songs that emerge from Kristin’s universe are familiar but unique. You can hear the touchstones of new wave, R&B, synthpop, krautrock, postpunk, and even reggae, but X-Communicate uses genre rather than adheres to it, with a distinct nod to the present.

The visual aesthetic has morphed, too: Dee Dee in her inky ebony garb is gone, and in her place stands a newly minted, assured figure - but one that’s playful, too. “It turned out to be timely, unfortunately, that I’ve been fantasizing about this sort of Thin White Duchess concept for a while. Maybe Bowie is my patron saint. He’s certainly always led the charge to evolve.”

“I feel free. I had to excommunicate myself to be able to explore. Even if I have to rebuild my whole career, I’d rather work tirelessly then feel stagnant. I feel excited again, and you can’t put a price on that.”

Listen To Kristin Kontrol’s Exquisite B-side “Baby Are You In?” from the X-Communicate Sessions 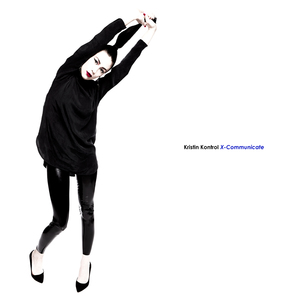 Kristin Kontrol Baby Are You In? Digital