Keiji Haino was born in Chiba on May 3, 1952. Inspired by Antonin Artaud, he aimed for the theatre, but an encounter with The Doors stimulated him into music, where he has examined and absorbed a wide range of music from the early blues - especially Blind Lemon Jefferson – to European medieval music to popular songs across the world. In 1970, he joined the group Lost Aaraaf, named after Edgar Allan Poe’s poem, as a vocalist. Meanwhile, he started to work on home recordings and taught himself the guitar and percussion. In 1978, he formed a rock band Fushitsusha, and, since 1988, after a recuperation period from 1983 to 1987, he has been internationally active in various forms including solo work; groups such as Fushitsusha, Nijiumu, Aihiyo, Vajra, Sanhedrin, Seijaku, Nazoranai, or The Hardy Rocks; as a DJ as “experimental mixture”; as well as collaborations with artists from different backgrounds. His work involves driving the guitar, percussion, the hurdy gurdy, diverse wind and string instruments, local instruments from across the world, and DJ gear to the extreme through unique techniques. He has released more than 200 recordings and performed live at least 1,800 times. 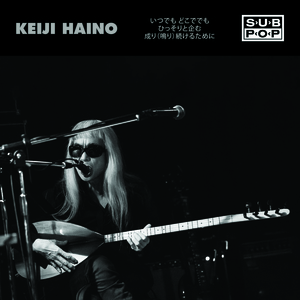 Whenever wherever, quietly plotting, so that it can keep on becoming (resonating)

Keiji Haino Whenever wherever, quietly plotting, so that it can keep on becoming (resonating) Digital
See more Keiji Haino merch