In mid-March, Julia Jacklin was one show from finishing a 12-month world tour for her widely celebrated sophomore album Crushing, when Australia’s prime minister announced the country would be restricting large gatherings due to Covid-19. Within a week, the closure of state borders meant a snap decision about where to base for the next month, and since then, a planned 3-month break from touring has turned indefinite.

The wild ride of the Crushing album release, five years of non-stop touring, and the unexpected turns of 2020 are all context for a very timely 7” release with renowned Seattle label Sub Pop.

On A-side to Perth, before the border closes, Jacklin says “I’ve moved around a lot the last 5 years; chasing things, love, work, something new, whatever and there’s always this fear that I’m leaving good things behind just to go somewhere else and be lonely. Whispering “everything changes” to myself helps get me to sleep at night. I started writing this song in Melbourne and finished it in Perth. It was like a little song bridge between the two cities to make the change easier.”

Jacklin recorded the 7” with old friend and Perth producer Ryan Brennan, who was the first person she ever recorded with 9 years ago when the pair were housemates, and Jacklin notes that she could “really see how we’ve both changed and grown over that period of time. It was really special.” 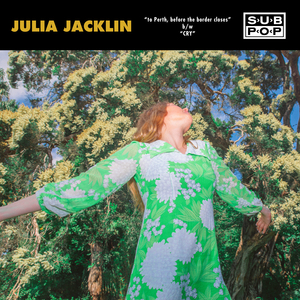 to Perth, before the border closes