The nicest thing anyone has ever – ever – said to Jo Hirabayashi, frontman of Jo Passed, is that his band’s debut album sounds like “fucked-up Beatles”. Titled Their Prime, the LP does sound like fucked-up Beatles. It sounds like, somewhere across an ‘80s universe, Lennon and McCartney discovered Can and Neu!, and maybe a little Sonic Youth and XTC along the way. Opening with “Left,” it demonstrates that timeless knack for dreamy melodies – chord progressions that sound like they were created in a land far far away. Lyrically, however, it’s imbued with a philosophical longing for answers to questions that have resurfaced for the first time since the explosion of counterculture in the late 1960s and early 1970s.

“We gave you everything, what’s left?” asks Jo in the refrain. It’s a question about art, about socialism, about the point of life. Considering the heaviness of the record, it’s relieving to find Jo in his home studio in Vancouver (the unceded traditional territory of the Musqueam, Squamish and Tsleil-Waututh First Nations) with a regular tendency to burst into chuckling fits. You could put the laughter down to a nervous energy, and a charming one at that. Despite the fact that he’s crucially aware of the world around him crumbling, he’s not lost sight of his sense of fun. His approach to Their Prime was to create a collage record of everything he’s inspired by. The last track “Places Please” he says is his attempt of trying to make Grouper dine out with Frank Ocean, whereas “Undemo” is This Heat versus Leonard Cohen. “I was trying to infuse different sounds I thought could really work,” he explains. “Like, what if Nick Drake fronted Swans?” I suggest Nick Drake might struggle in that role. He laughs again.

On the West Coast, Jo has been part of the DIY music scene since his late teens. Initially it was just him and his high school best friend Elliot Langford against the world. They were the “freaky music weirdos” and they began their own band projects. Jo was pretty sure that it would be two of them riding into the sunset – or maybe the gloom – together. Personal circumstances and the phenomenon of the late 20s return of Saturn (for those who believe in astrology) got in the way. Their band Sprïng called it a day. That’s where the life of Jo Passed began. The idea of a band dynamic is far more appealing to Jo than solo projects, and the current incarnation of Jo Passed feels like its most robust yet.

Jo, along with his friend and drummer Mac Lawrie, moved across the country from Vancouver to Montreal. The two would play shows in Montreal and eventually tour the far right corner of North America. Upon Jo’s return to the west coast, multi-instrumentalist Bella Bébé officially joined the band in January of 2016, expanding Jo Passed from trio to a full quartet. Multimedia artist Megan-Magdalena Bourne began working with Jo Passed on a video project for the song “Rage” (from the Out EP). This creative partnership would eventually lead to her taking on the role of bassist for the band.

When not geeking out over The Zombies, or Nirvana, or Johann Sebastian Bach… Bella, Mac, and Megan have worked with Jo to realize the live experience of Their Prime, following two Jo Passed EPs titled Up and Out. Tonight is their first ever show as a foursome, and Jo is pumped.

“A project like this was never supposed to happen for me,” he says, still surprised. “Sprïng was falling apart and was turning into something resembling my project, which was never the point of that band. Then I started to get this really bad insomnia and it culminated in me starting Jo Passed. The second I finished one song my insomnia went away.” Jo needed a functional channel to pour his excess energy into. He’s always been fidgety, writing songs from a young age, reared as a classical pianist, then learning guitar in his mid teens. “Jo Passed has been the first thing where I know that if I funnel all my energy into just being a songwriter, it’ll be better for my health. It wasn’t a career choice. It was survival.”

Upon Jo’s return to Vancouver from Montreal, he’d found a completely different way of existing. He admits to still having a love/hate relationship with Vancouver, and that’s documented extensively in ‘Their Prime’, but it wasn’t till moving to Montreal that he was afforded the informed perspective to re-investigate his identity as a Vancouver-based artist. Having spent his whole life here as the child of two dance choreographers, he has a very unique and informed perspective but is very quick to recognize the privileges his upbringing have granted him. In fact, his parents’ leased studio space (KW Studios) allowed him to split the creation of ‘Their Prime’ between his own living space and a proper room. Sticking to his DIY approach he engineered and produced the album himself.

Growing up, he saw many facets of Vancouver – the gentrification, the poverty, the reality check he’d have when he considered his family’s struggles compared with those of Indigenous communities. He channeled his political and social awareness into the music communities he found when he was 18.

“This album is my concept record of dealing with the idea of calling Vancouver home. There are struggles with the border, cost of living, space…” Jo shares a home with many others, and it doubles down as a venue, of which there’s a dearth of sustainable venues in Vancouver. “There’s this big question mark where even people in Vancouver are like, ‘What is this city?’”

Their Prime is a record about identity and the loss of time that happens as a direct consequence of being in the city with nowhere to rent, no time outside of employment and no realistic expectations to live up to. It encompasses that fear of being beyond the glory years, the most creatively fruitful period of one’s life. Those years were lost to contemporary struggles for working relationships, home, identity and space. “It’s me owning my worst nightmare,” he admits. “A lot of the Jo Passed project has been about confronting fears. I was afraid to move away from Vancouver to Montreal on my own. Afraid to leave musical relationships I had. Afraid to bare the full responsibility of a project. I’ve been putting out records and not ones anyone’s necessarily heard. Being open about those fears is a good way of dealing with them. You end up at this point where you hit 30 and you’re like, ‘Oh what happened? Am I done? Did I not activate my main creative energy?’ It’s a ridiculous idea but 30 feels a little like 1000 in rock n roll terms.” You can hear the frustrations and the jitters in the crashing loud-and-quiet motifs throughout the album’s twelve tracks, which offer up a patchwork quilt of sound, similar to Faust’s IV or Fugazi’s Red Medicine.

The first half of the record begins with the most doom-laden themes. ‘Left’, ‘MDM’ and ‘Glass’ are particularly end-of-the-world-y. “The songwriting was finished the day Leonard Cohen died, which was two days after Trump’s victory, so there’s a lot of that energy in the record,” he says. The lyrics are troubled with a lack of purpose, a search for what even matters in art now, whether there’s any way to impact still. “I was trying to not get too grandiose in political statements and re-centre them in my own experiences,” he says. “Glass” moves around the idea of a lack of belonging, a crisis of self: “I’m just a tenant in my birthplace” sings Jo.  “‘Glass” is pointed at Vancouver. I’m a guest here. I’m trying to encapsulate the experience of what it’s like. I relate it to a slow regurgitation of a body: you’re gradually being repulsed out of something sick, but you’re fighting to be swallowed into it. I’m asking – What’s a home? Can you just buy one?”

On the more celebratory tip comes “Undemo,” which is a song about communities of show goers  and DIY music scenes. “Killing times in the end times together,” sings Jo. “Music scenes live under the guise of environmental collapse, neo-liberalism and Trumpism, yet we go and play music to each other. It’s amazing existing in these communities. It’s been life saving! You can get into this moralist guilt and think, if we’re gathering here shouldn’t we be forming activist groups? In my early 20s I felt a lot more of  that righteousness. But there’s two sides to all that. There’s fighting the bad and there’s also defending the good, ie, playing music in safe spaces and supporting each other creatively.”

Physical spaces are so important in our social media-obsessed world. “Facetook” is a comment on that, whereas “Millennial Trash Blues” (a tongue-in-cheek poke at Bob Dylan) makes direct reference to this concept of the “snowflake generation”via lyrics about snowflakes lying on the ground. “We’re a bunch of unique snowflakes but it’s actually the snowflakes of a burning trash fire.” In as much as there’s matter-of-fact depictions of harsh realities, there’s also a sense of hope. None more so than on “Repair,” which was written the day of Trump’s election. It combines soft melodies with walls of chaos. “I was trying to make something that encourages fixing. We’re losing track of that,” adds Jo. Playing it live has proven itself to be particularly cathartic.

It’s touring Their Prime and hearing people’s reactions to it that are most at the forefront of Jo’s mind right now. “It’s like I’ve put all my negativity into a place and now I’m lighting it on fire as a way of releasing it” Indeed sometimes you have to banish the bad vibes to get to the great ones.

We Signed Vancouver B.C.’s Jo Passed! Now See/Hear Video For “MDM” From The Band’s First Full-Length, ‘Their Prime’ (out May 25th) 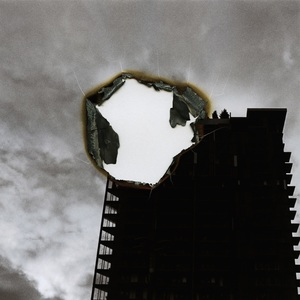