Jaill is a lot like other bands; they’ve slept on your floor, you’ve made fun of their pillow cases, they’re not nearly as good at Excitebike as they said they were and although they all say they’re cool with cats, no one’s excited about sleeping at the cat house. So it should come as no surprise that, as bands sometimes do, they’ve made a new record. And that record is Traps, their second for Sub Pop, but first to adopt the bold new marketing strategy of giving away a free pair of Nike cross-trainers to anyone who steals it on the internet. Take that, Radiohead. So, but, what is Traps? And what about it can best fill five paragraphs? Traps is pretty, it’s moody, it pops. It has the scrappy, vengeful enthusiasm of a puppy stuck under a blanket. It’s an adorably grumpy bear just awoken from his long winter’s slumber, with a mangy heart rarely found outside of the stuffed animal bin of a Salvation Army. It’s an album that expects to be taken seriously goddammit, even though it just puked on the bar.

Traps is also, and confidently, a Jaill record. It’s an acerbic exercise in both humility and aggression. Lyrically and melodically it portrays the malfunctioning universe inside a home, taking into account the myriad ways in which relationships and responsibilities can destroy a person’s mind. “Gave myself a good grade on barely losing my shit,” sings Vinnie Kircher on “While You Reload.” His resignation to the failed road ahead is all over Traps, from the sarcastic slap of the drum-machine snare in “Horrible Things (Make Pretty Songs),” to the recurring, sounding-like-a-broken-Slinky riff of album opener “Waste a Lot of Things.” In “House with Haunting” Kircher waxes philosophical on the pains of getting older, with a home still overrun with friends and houseguests. Yet on “I’m Home,” Kircher laments, “I have clown hands now, bowtie spins around,” whatever philosophies he had giving way to sardonic acquiescence.

But for Traps to sound like its subject matter was in a way inescapable, recorded as it was in Kircher’s crummy, poorly lit basement. Sacrificing most of 2011 to the album’s completion, with minimal gear and a control room of thrift store afghans, Jaill set out to create a record they thought would be worthy of appreciation, without much of a plan beyond that. This was a return to the in-home manufacturing process they honed back in the day, before big labels came along and started throwing their comically large bankrolls around. They started tracking in January, combing through well over a dozen songs, rerecording some, judiciously discarding others. The process became about self-awareness, scrutiny and a strong desire for inventiveness. By October, the band was in agreement: tracking for the lean, eleven-song album was finished. November brought them out to New York briefly, where Brooklyn’s most hilarious jokester, Nicolas Vernhes of Rare Book Room, mixed the band’s mangled masterpiece. He brought the ideas in line, keeping the sentiment true to its basement origins. Clownishly huge stacks of money were again thrown at various problems. High-fives were given, and deserved. Soon the album was mastered and aptly titled, Traps.

When Jaill nonchalantly stepped into the room with 2010’s That’s How We Burn, the group had already turned out a small catalog of self-recorded/released albums and EPs. Sub Pop first heard the band on an LP bought through the mail, the cover still hot from the Kinko’s copier. When it arrived covered in dog hair and finger smears they knew they were on to something. Here was a group of guys so focused on their metier; they couldn’t be bothered with the bullshit details like where not to set the can of La Croix. And as 2009’s There’s No Sky (Oh My My) (the above-mentioned, mail-ordered LP) demonstrated, Kircher is equally comfortable crafting songs that either amble up slyly, or tumble out pell mell, with lyrics that betray his English major background. That’s How We Burn only reinforced this. SPIN said of the album, “What elevates their debut beyond your average twee-punk rager is the gentle psych dabblings: extra delay on a guitar solo, an errant ‘ooh-ahh-ooh,’ a dubby Panda Bear flourish, and the swirling noise that murmurs through the background of the cheerful ‘Snake Shakes’.”

So in conclusion, even though you said you were ready to go like fifteen minutes ago, here is Jaill still ambling around the stage having loaded out barely any of their gear, and the merch is still sitting out everywhere. And although it would be great if they could just move it along a bit faster because, as you’ve mentioned more than a couple times already, you have to work in the morning, perhaps have work to do even now, you wait because you know deep down that you love these guys. It might take until three in the afternoon, and every last clean dish in the kitchen, but they will totally get you back the next day with some breakfast tacos and perhaps an LP. (At cost.) And besides, what else truly makes a house a home but having five vibrantly unwashed men sleeping on the floor of your living room? Traps comes out June 12th, 2012, on Sub Pop Records, not coincidentally six days following National Gardening Exercise Day. So cop a disc, get out there this summer and exercise with your plants! 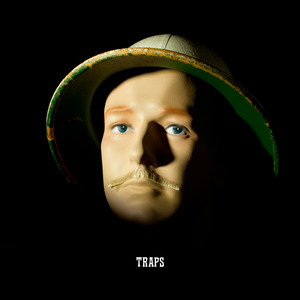