A couple of years before they ended their reign, J cut a solo album called Martin + Me. Recorded live and acoustic, the record allowed the bones of J’s songs to be totally visible for the first time. Fans were surprised to hear how melodically elegant these compositions were, even if J still seemed interested in swallowing some of the words that most folks would have sung. Since then, through the reformation of the original Dinosaur Jr lineup in 2005, J has recorded solo albums now and then, when he had songs that were suited to acoustic (or at least relatively toned-down) performance. And those album, Sings + Chant for AMMA (2005), Several Shades of Why (2011) and Tied to a Star (2014) had all delivered incredible sets of songs presented with a minimum of bombast and a surfeit of cool.

Like its predecessors, Elastic Days was recorded at J’s own Bisquiteen studio. Mascis does almost all his own stunts, although Ken Miauri (who also appeared on Tied to a Star) plays keyboards and there are a few guest vocal spots. These include old mates Pall Jenkins (Black Heart Procession), and Mark Mulcahy (Miracle Legion, etc.), as well as the newly added voice of Zoë Randell (Luluc)  among others. But the show is mostly J’s and J’s alone.

J’s vocals have always leaned in a direction acknowledging the Bard of Toronto, but as early as Dinosaur Jr’s third single, the epoch-defining “Freak Scene,” J’s off-hand vocal delivery was instantly recognizable. On a track like “Sky Is All We Had,” the same dynamism is at work, but the evolution of technique is so massive as to lift the proceedings to a new level. The album is chock-full of similar nuggets. Built around acoustic guitar figures, often holding off electric flights of guitar backdrop until the third act, the tunes are massively seductive and satisfying. J’s fave track is “See You at the Movies,” which has a fully evolved sense of loss hanging over it, and features the classic couplet, “I don’t peak too early/I don’t peak at all.”  My own choice is “Picking Out the Seeds,” on which J pulls out his falsetto voice to great effect, and maintains a middlin’ pace that makes the tune one of the great Beard Rock readymades of the era.

But Elastic Days brims with great moments. Epic hooks that snare you in surprisingly subtle ways, guitar textures that slide against each other like old lovers, and structures that range from a neo-power-ballad (“Web So Dense”) to jazzily-canted West Coasty post-psych (“Give It Off”) to a track that subliminally recalls the keyboard approach of Scott Thurston-era Stooges (“Drop Me”). The album plays out with a combination of holism and variety that is certain to set many brains ablaze.

Drag Icon Dina Martina Stars In J Mascis’ Official Video For “Elastic Days,” The Title Track From His Forthcoming Album Out This Friday 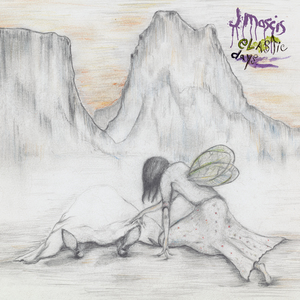