You probably haven’t heard of Husky before now. That’s because compared to most young musicians operating in this era of uninterrupted connectivity and non-stop self-promotion, the Australian quartet might as well have crafted their debut full-length somewhere atop the snow-capped peaks of the Himalayas. With its warm, acoustic timbres and carefully crafted songs, Forever So is the sound of a band that from its inception cared more about making one sublime album than acquiring a million followers on Twitter.

Front man Husky Gawenda and keyboard player Gideon Preiss are cousins who grew up together and discovered their love of music, together. Though the four band members have disparate tastes, their shared passion for classic sounds, rich harmonies, and artful songwriting points back to the artists they grew up on: Crosby Stills & Nash, Bob Dylan, the Doors, Neil Young, Leonard Cohen, the Beach Boys. Yet while Gideon took easily to the life of the performing musician, playing in myriad bands throughout his teenage years, Gawenda, who spent years writing songs alone in his bedroom, shied away from the spotlight. “I was actually terrified of performing,” he admits. “It took a lot of will power to start singing my own songs in front of anybody, but I was determined to do it, because I always had the dream of playing music as my way of life.”

Augmented by bassist Evan Tweedie and drummer Luke Collins, whom Preiss met on the Melbourne music scene, the foursome began playing small local shows in late 2008. From the outset, the band’s primary goal was making a record that would bring their songs to full fruition. In a junk-filled bungalow behind Gawenda’s rented house, using borrowed equipment and siphoned electricity, they cobbled together a studio. “We ran all the cables through the garden and into a window,” says the singer. They used every corner of the little cottage—bathroom, kitchen, corridors—sometimes all at once; whatever it took to preserve the vibe of that unique time and place. That attention to ambience is audible in the judicious use of space throughout Forever So, allowing instruments and voices room to breath, echo and resonate.

“We wanted to have complete creative control over everything on the record,” says Preiss of their D.I.Y. approach. What they lacked in practical experience, they made up for with enthusiasm. “If you know what you want, and you work hard enough on it, you can create it,” adds Gawenda. “We weren’t trying to achieve an engineering masterpiece, but the heart and soul of the songs are in there.” If the music and lyrics cried out for more textures, the boys layered on the parts; with its organ swells, swirling guitars, and stacked vocals, the purposeful “Dark Sea” exemplifies this extreme of the Husky aesthetic. At the other end of the spectrum, Spartan moments like the opening bars of “How Do You Feel” display disarming restraint.

In a pleasant, somebody-up-there-likes-me twist of fate, Husky was propelled from Gawenda’s backyard to national prominence at just the right time. Late in the creative process, feeling that the album was still missing something, Husky coaxed forth “History’s Door,” a sun-dappled reverie of hushed vocals, crisp drums rolls and acoustic strumming. This last-minute addition to the set would prove their golden ticket, after they entered it in a contest conducted by Australia’s Triple J radio network to find the nation’s next great-unsigned band—and won! Before they even had a manager, Husky’s finely-wrought music was being promoted from coast to coast.

Seeing their commitment to Forever So through to its finish, Husky eventually took their recordings to Los Angeles to be mixed by Noah Georgeson (Devandra Banhart, Joanna Newsom, The Strokes). “The recording had been such a labor of love, and we had grown so attached to the songs, it was difficult to imagine handing them over to someone else to mix them. But Noah’s sensibility and musicality really complimented the songs,” says Preiss. “He was so humble and sweet, and just knew the right times to be opinionated.”

The final result is a full-realized, long-playing album that holds up start-to-finish, from catchy opener “Tidal Wave,” with its hum-along harmonies and surprise psychedelic midsection, to the understated, intertwined brass parts that conclude “Farewell (in 3 Parts).” In the syncopated rhythms of “Hundred Dollar Suit” or the reverberating piano strings and laid back bass that underpin “The Woods,” you can sense fingers moving over instruments and lungs giving breath to voices, the unfolding of ephemeral ideas into fresh yet fully realized songs taking forth before your very ears.

And now you’ve heard about Husky. Spread the word. 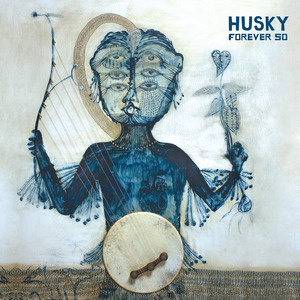