The band took this as a nod of respect (if not a subtle lament at the marketability of said art) and as a loving (if evasive) attempt to describe what Holopaw has become since their inception in 2002. Hailing from Gainesville, Florida (and named after a Florida town none of them are from), Holopaw released their self-titled Sub Pop debut in 2003 after vocalist John Orth co-wrote, with Modest Mouse’s Isaac Brock, much of Ugly Casanova’s Sharpen Your Teeth. The following year, Holopaw multi-instrumentalist Michael Johnson released a glitchy, warm solo debut called Nonsense Goes Mudslide on Must Delicious to glowing reviews, and Holopaw toured extensively with labelmates Iron and Wine and Fruit Bats. It was easier to find descriptors and points of reference within their earlier work, which was anchored by Jeff Hays’ acoustic guitar and pedal steel and offset by the blips and beeps of Michael Johnson’s synthesizer noodling. Though the lineup is the same on their sophomore effort, Quit +/or Fight, lines between the analog and the digital have blurred. Johnson describes the "traditional elements becoming weirder and the weirder elements more traditional. The elemental juxtaposition here results in a remarkably centrist focus unmatched by the band’s previous work. "The parts seem to fit together a bit more precisely this time around, says Johnson.

“A queer, a Peruvian, a redneck, a burnout and an asshole walk into a bar…” Holopaw’s Michael Johnson on Holopaw.

It is remarkable that the peerless cohesion so evident on Quit +/or Fight was achieved by such an unlikely gathering of musicians, especially given the fact that they were scattered across the country and rarely in the same room at the same time during this recording process. Holopaw’s new album brings each member to more textural, delicate artistic heights each dynamic track tells its tale through sweet, understated and complexly orchestrated melody that engages as it soothes. On Quit +/or Fight, when universal themes of sexuality, longing and lament are explored through colorful pirates, ghosts, bear cubs and princes with toothaches, in motel rooms and across chilly landscapes swirling with fake snow, familiar questions are answered with fresh conclusions. In a Holopaw song, the boy down the well finds out he’s happier there. Thick with strings, winds, drunken bossanova percussion (“3-shy-cubs”), stomping, handclaps, wine bottles, synths, and thrift store furniture-as-instruments, the album shows a band unafraid of brash creativity and improvisational instrumentation. After all, Quit +/or Fight is all about taking the road less traveled: “Ghosties” showcases the strength of vocalist John Orth, his one-man choir swelling out of nowhere to run with the melody, and later the band’s deeply organic, thick fuzz-bass unearths the sweet lament of “Velveteen (All is bright).” Just when “Losing Light” threatens again and again to burst at the seams, Holopaw pulls back the reigns, quieting the song’s core back into a hush.

To focus these ideas, Holopaw enlisted the help of old friend Mike Pecchio, resident producer at Scandalabra Studios in Brooklyn, NY. The Mercury Program’s Tom Reno and Dave LeBleu contributed guitar and vibes throughout, and on “Curious,” Daedelus lends wind. The end result: an improbable group of individuals all coming together to create an album that is quietly moving, filled with small gestures that speak volumes.

The release date for Holopaw’s second full length was August 9th. That day in history also gave us the birth of Whitney Houston and the death of Jerry Garcia. 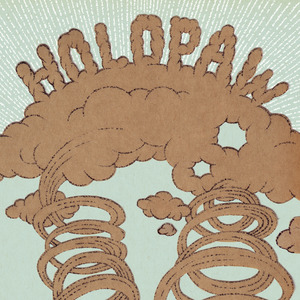