Ruthless Sperm. What’s in a name? A whole hell of a lot, actually. Sperm can ruin everything. Persistent little shits that fight their way to the prize. Just one little champ is all it takes to go about fucking things up from the inside out. If this lone soldier gets ahold of its egg of choice, things will break apart, bubble and mutate. A microscopic violence that leads to thirty plus pounds of sludge and flesh. Kiss your hourglass figures goodbye, ladies. Expect convulsive retching in those morning hours as well. Still, beauty tends to be the outcome after all this splashy mess and most parties find a happy, rewarding, worthwhile ending. Most parties. To the unfortunate others, the outcome can be more terrifying than anything dreamed up in a Polanski flick.

His Electro Blue Voice follows a similar path to creation. They set their trajectories on a Kraut-driven rhythm; a haunting, cinematic wash or a mechanically-sound industrial thump. Once the choice is made, it’s guaranteed the trip will be violent and unrelenting. They know how to hammer it home, ruthlessly. Only His Electro Blue Voice doesn’t tell you up front which crooked path is gonna lead you to the finish line. And for the most part, they don’t even know. Songs are conceived, spat out and left to dangle unplanned as the band decides in real time how to go about their completion. Each tune is like a flopping outgrowth that has been shat upon the studio floor. The band then collectively attacks their newborn lump, forcing it to work itself out as the tape machine threatens to unspool like some unholy magnetic and blackened gutpile. Or is that the umbilical cord? Slap it on the ass and shove it in a onesie, all ready for consumption. Whether it’s slathered in a thick glaze of neo-gothic guitar, an unexpected electronic pulse or leveled under a death trip full of panic inducing terror shrieks, His Electro Blue Voice have become masters at building soundscapes that leave brave listeners spent, soiled and with nothing positive on their mind. Ringleader Francesco Mariani’s lung capacity is limit-tested as he spews self-deprecating psycho-babble and frustration over unrelenting guitar swells. Someone should buy this guy a dozen long stem roses and chocolates before he ends up with debilitating case of the throat polyps. Whitewashes of metallic noise shove at the propulsive rhythm section, steering drummer Andrea Napoli and bassist Claudia Manili beyond the confines of the acceptable pop music norm. Time expands. Spasmodic and twitching. Cronenberg-ian? A rebirth. A new music.

After a short stack of collectable singles and some hard to find import EPs, this Italio-trio with the long name unleashes their debut long-player on the Sub Pop imprint. Thirty-plus minutes of shock-horror blasts, blaring cyber-synth attacks and that gloriously repetitive Stoogeoid-meets-Killing Joke throb. His Electro Blue Voice has pulled back on the reins, controlling the demons that reside in their improvisational pits of personal hell. The end result is a platter that’s as direct as it is deadly. Still chock full of uncharted ugliness; only now the loose ends have been cattle-prodded into submission, wrapping things up with just a few scrapes and bruises so we can continue down the next rabbit hole. Yet for all the bombast and bummer, His Electro Blue Voice still bring forth euphoric hooks and some shards of shoegaze, if only to leave them strewn about within the mechanical wreckage. You can almost hear the sounds of the early 4AD roster in the grooves, had they been captured to track by composer Fabio Frizzi and left teetering between warped indie sensibility and creepy-crawl madness. Crazy sounding, but damned if it doesn’t work.

Ruthless Sperm by His Electro Blue Voice.
Subtle as a construction site and precise like a leather gloved Giallo killer.
This is the apocalypse.
This is end times.
Thankfully we get a decent soundtrack to go with it. 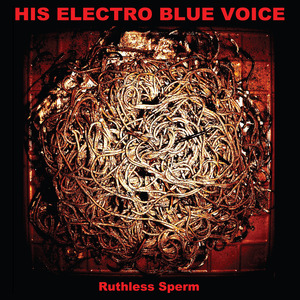