It can be easy, sometimes, to forget where you started. When the goal that you set out to create no longer carries any resemblance to the original plan, and the finished product is as much of a surprise as it is a completion. In a lot of ways that was how Keep in Mind Frankenstein came to be.

Singer-guitarist Mat Brooke had big plans for Grand Archives’ sophomore album. The band had written a slew of new songs, and honed them during sound checks around the world. They were good to go. And when they entered the studio and the tapes started rolling?

“It sounded kind of… Like guys who don’t really play rock music trying to rock out,” confesses Mat.

Their record, it seems, had very different plans for how it wanted to sound. Except for “Dig That Crazy Grave,” a buoyant ditty redolent of Southern California and summer afternoons, all the material originally slated for the album wound up on the cutting room floor. Yet as the earlier songs fell away, new ones were composed to take their place. “And the record took on a new identity,” says Mat, “a little darker than the first album.”

Sometimes the group had barely scanned the lyrics before they stepped into the vocal booth to record harmonies. “As opposed to singing like you’ve practiced the song for a year, we were singing each one like it was the first time… because it really was,” says Mat. Not that he’s complaining. “This sounds a lot more alive.”

The album’s finest moments include several happy accidents; little ideas nurtured with help from producer Ben Kersten (who also recorded The Grand Archives, the band’s 2008 debut) and recording pal Ron Lewis. One example: After the addition of cello and accordion, a late-night ukulele improvisation blossomed into the bittersweet elegy “Topsy’s Revenge,” inspired by the infamous 1903 newsreel footage of Thomas Edison electrocuting a rogue Coney Island elephant.

A few friends dropped by. Brooke’s former Carissa’s Wierd cohorts, Jenn Ghetto and Sera Cahoone, sang backing vocals. The gorgeous streaks of pedal steel across the late-night saloon scene of “Oslo Novelist” come courtesy of Jason Kardong. But for the most part, Grand Archives played everything. Especially the weird bits. Jeff built a mammoth glass harp, mounting multiple wine glasses on a plank, filling them with liquid, and rubbing the rims with his fingertips to make noise. “Then he put it in the back of his truck one day and drove off and smashed it to pieces.” A cut-rate Theremin—“this piece of junk from a Radio Shack somewhere in the ‘80s”-—pops up on several songs, too.

Keep in Mind Frankenstein, like much of its predecessor, was crafted at Paradise Sound in Index, WA. “Index has one of the most haunted houses in America,” discloses Mat. One night, late, they ventured into the old mining town, and into the site of a notorious double suicide. It turns out they weren’t the first pilgrims. “It was insane. There were Bibles open on the bed, and flowers strewn everywhere. We all felt a little haunted that week.” The stately “Siren Echo Valley Pt. 1” and its lurching waltz-time sequel were hatched in the wake of those nocturnal antics.

Having enjoyed a fair amount of media attention before their debut album was even finished, Mat hopes the next stage of Grand Archives’ journey will be mellower. “All bands should be allowed to have the joy of being a new band. We’d like to come in under the radar on this record.” At least, that’s the plan. Plans sometimes change. 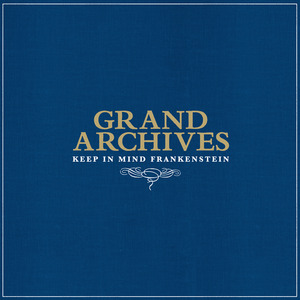