Self-described “elder statesman” Brent Rademaker exudes the vitriolic stuff of life, and his hunger to communicate that energy is finally being satiated. After decades of musical experimentation in L.A. based shoegazer outfit Further, late-80s Brit-sounding twangers The Tyde and seminal neo-psych folk legends Beachwood Sparks, Rademaker has finally taken the reins and created dream rock that’s as deliciously rich and indulgent as he wants it to be. To fans, Frausdots may sound like a broad departure, but sexy, melodic nightlife pop has been coursing through Rademaker’s veins all along. “I was always the psychic bassist who wrote the music,” he explains. "If I hadn’t been playing second fiddle in any band I’d ever been in, I would have made this record right out of high school. It’s a return home for me: it’s the first thing that’s a sole reflection of my life.

Although the bulk of Frausdots’ material was conceived nearly three years ago on a trip to Spain with Frausdots co-conspirator Michelle Loiselle, it wasn’t until other contributors became involved that the album’s sound became fully realized. “We decided to do this when we were just friends, but we fell in love in Spain when The Cure was playing a festival”we absolutely fell in love to the strains of that one set,” Rademaker clarifies. It’s fitting for both he and Loiselle (who, among other projects, is a backup vocalist on Guns N Roses Use Your Illusion II_) that The Cure’s Roger O’Donnell contributes keyboards to Couture, Couture, Couture. Among other members of The Tyde, Vocalist Ned Brower, (Rooney) guitarist Benjamin Knight (The Tyde/Beachwood Sparks), guitarist Corey Lee Grant, (Warlocks) Ric Menck (Matthew Sweet/Velvet Crush), drummer Hunter Crowley (Brian Jonestown Massacre) and chanteuse Mia Doi Todd contribute. Each player’s unique and disparate stylistic touches enhance Frausdots’ chocolate-rich metropolitan tales immeasurably. “There’s a big blur between drugs, music and fashion in the city, and we were stuck in it all,” says Rademaker.


The environment that nourished Rademaker’s sultry new approach to songwriting also prompted him to explore new ground in production. “There’s a tiny bit of California flare to the production, which I’m very proud of,” he asserts. Flare, indeed: Couture, Couture, Couture was recorded in the Summer of 2003 at Jimmy Sloan’s Hollywood hills home studio as forest fires raged in the nearby San Fernando Valley. "It was a real jump forward for me because Beachwoodsparks was very much into lightning-capture lo-fi. The quality conveys the emotion in the songs." Drawing from early 80s rock recordings where new methodologies transformed analog equipment and instrumentation into an entirely different animal altogether, “Frausdots” aimed to create an album “in the vain of classic Echo and the Bunnymen: dark, rough, but precise.” 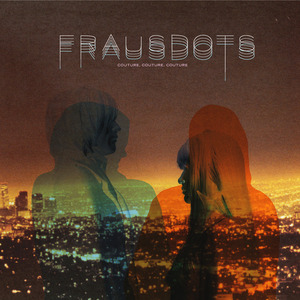