First impressions aren’t usually afforded a second chance, but somehow an obscure Albuquerque quartet called Flake Music found a loophole around the turn of the millennium—and now, 15 years after disbanding, they’re at it again.

The group that reinvented itself as The Shins and, in turn, became an archetype of literate, engaging indie-rock (or, as a Natalie Portman character once famously said, the band capable of writing a life-changing song), is giving the world another opportunity to appreciate its one and only album for the first time. On Nov. 24, Sub Pop, in conjunction with frontman James Mercer’s Aural Apothecary imprint, is reissuing Flake Music’s When You Land Here, It’s Time To Return.

But don’t be mistaken: This updated edition isn’t just the same old album (originally released in 1997 by Omnibus Records) with revised artwork slapped on the front. Sure, the tracklist hasn’t changed, but unlike a lot of “remixed and remastered” reissues that arrive relatively unaltered, sonically the new version of When You Land Here—remixed by Grammy winner Kennie Takahashi (who’s worked with Mercer’s Broken Bells) and remastered by JJ Golden—is light years removed from the original.

That said, the glistening studio tweaks wouldn’t mean a thing if the songs themselves weren’t so compelling. Fans of The Shins will find plenty of similarities between the two bands (“Mieke,” in particular, has made it onto Shins setlists), and there’s ample maturity conveyed by guys who were still in the process of finding their way musically. From jangly opener “Spanway Hits” to the previously untitled four-track recordings that pepper the album (now named “Candy Dish Of Diamonds,” “On The Playground, In The Wind,” and “Faded Polaroids,” the last sung by bassist Marty Crandall) to the various Built To Spill-isms that can be heard throughout, the album is a clever, catchy ride through mid-’90s indie rock that gloriously stands the test of time. And then there’s the foreshadowing “The Shins,” written before the band existed but, as Mercer explains, “There was something about the sentimentality of the song ‘The Shins’ that I thought was aligned with what I was doing in my recording project at the time.”

Also notable is a striking reinterpretation of the original cover by Seattle artist Keith Negley, who has brightened the corners and beyond, removed the jubilant female beachgoer’s top, and visually matched the music’s new sheen.

Not that the band members can really be blamed for the initial release’s shortcomings. They did the best they could with the resources at their disposal, and there weren’t a lot: The album was recorded on the cheap over a few days at the home studio of Crandall’s stepdad. Considering the time and place, it’s remarkable that such a unique creation was made in the first place. And the fact that it didn’t exactly light up the charts speaks more to the fact that they were simply ahead of their time.

“In the ’90s with the Seattle grunge thing, Albuquerque really embraced that sound,” says Mercer. “It felt a little bit like heavy metal, and it was still kind of macho, and we were melodic and poppy and were just pushing too many weird buttons.”

When You Land Here, It’s Time To Return was the culmination of five years of work (which included some singles and an EP) by four friends who exemplified the band concept: They jammed together, wrote together, and ideas made the cut when they made sense to everyone. Following a string of fits and starts and various discarded monikers (including Earwig and Orange Little Cousins), Flake—who were eventually forced to add the Music by a similarly named outfit—were formed in 1992 by singer-guitarist Mercer, bassist Marty Crandall, guitarist Neal Langford, and drummer Jesse Sandoval. They rallied around an affinity for new wave and the poppier side of punk rock, and made music that sounded interesting to them, prevailing winds be damned.

“We would literally go down to the basement and get stoned or drunk and just riff out,” says Mercer. “Somebody would be playing something that they thought was cool on the guitar and I’d try and sing over it. We were just constantly fucking around, and if we all came up with cool parts and we were all stoked on it, then it could be a Flake song.”

Though it would be natural to assume that Mercer was responsible for Flake Music’s direction, Langford was actually the band’s de facto leader, booking shows, handling the artwork, and generally guiding their way. In fact, it was Langford who inspired Mercer to perform in the first place.

“I wanted to be in a band, but I was too shy and really didn’t know how to play an instrument,” says Mercer. “Neal and I were into a lot of the same stuff, REM and The Replacements and stuff like that, so we’d talk about music and hang out. He heard me playing guitar and I think he wanted to inject some new energy into his band Sub Culture, so they hired me on as a rhythm guitarist. Neal dragged me onstage and got me to start playing.”

It was Langford’s hard work that landed Flake Music their first tour, a jaunt out West in 1996 that included a fortuitous stop in Chico, CA, where the band played with Modest Mouse, launching a friendship that exists to this day. It also ended up being their only tour, yet another reason why Flake Music never got the recognition they deserved. They kept playing gigs around New Mexico and made a couple of stops in Texas opening for Modest Mouse, but things started winding down for Flake Music in 1999, culminating in Mercer leaving to focus his attention on The Shins, the side project he’d started (with assistance from Sandoval) as an outlet for the pensive and plaintive songs that didn’t fit into the group’s jam-in-the-basement aesthetic.

“I had really fallen in love with bands like The Olivia Tremor Control and Neutral Milk Hotel, stuff where they were really writing songs and they were getting experimental with the recording,” says Mercer. “I wanted to do that, and that just wasn’t what Flake was about. We were about something that was different and very powerful—that thing of doing things together and everybody taking part in this sonic effort. There’s something really, really cool about it. So I knew that I would miss it in a lot of ways, and I did, but I just needed to do this new thing.”

The rest, as they say, is history. The other Flake Music members eventually joined Mercer’s new band, they signed to Sub Pop, moved to Portland, Natalie Portman and Zach Braff fell in love over “New Slang,” and these days The Shins play places like Red Rocks. But as far removed as they all are from those formative years (Mercer is now the lone original member of The Shins; Crandall and Langford still play together in Sad Baby Wolf), it doesn’t mean they aren’t acutely aware of what they accomplished back in the day. It took a while, but the second coming of When You Land Here, It’s Time To Return is a first-rate experience.

“I’m so happy about this record being remixed and sounding the way it does,” says Mercer. “Partly because it feels like what could have been looked at as a real waste of time, like all of the effort we put into Flake, all those hours hanging out, it’s like we’re undoing some sort of injustice, you know? It’s like some strange kind of redemption for us all.” 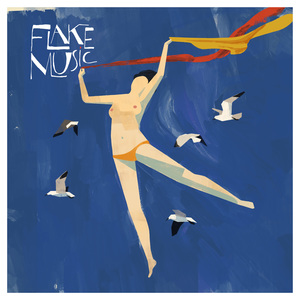 When You Land Here, It’s Time to Return