There’s an obvious chemistry emanating throughout Finom’s music that’s so tangible it can only come from a decades-spanning friendship. Songwriters Sima Cunningham and Macie Stewart formed their unbreakable bond performing throughout the fringes of Chicago’s many interlocking communities, collaborating with titans from the city’s indie rock, hip-hop, and improvised worlds. The two formed Finom in 2014 as an outlet to explore an unconventional approach to their instruments. “That’s the whole genesis of the band: us walking up to our guitars and saying, ‘how can we make this noisemaker do something different?” says Cunningham. Their 2016 self-titled debut EP took these experiments live and showcased the band’s vocal interplay that is another key to their songs. The full-length follow up, Parts, found the duo adding a drummer, Matt Carroll, and expanding their sound; Spin wrote: ”Finom’s aesthetic universe has the cramped intimacy of a small rehearsal space, and they are its masters. Anything they can squeeze inside—swirling baroque vocal melodies, punchy punk power chords, three-minute rockers and dreamlike chamber-pop suites—ends up sounding like Finom.” Their latest album, Fantasize Your Ghost, was released in June of 2020 and found the band featured in outlets such as Premier Guitar and Uncut with songs that capture more closely the band’s live shows. 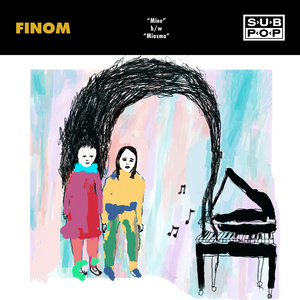