“Interpretation is the master key” -Rick

It starts around ’78 or ’79 in Sydney, Australia. feedtime evolved from this point. There was no “formation,” it just crept through a few people who believed in the same purpose. Rick and Allen met each other in February 1970 and became friends through circumstance and necessity. Both shared a connection to music: Allen with the Sydney hard rock of the ’70s; Rick with Cajun music and bluesmen such as Blind Willie Johnson, Blind Willie McTell and Mississippi Fred McDowell. Both recall seeing live performances by (Australian) X and Rose Tattoo, bands who outlined the fundamentals of what would become “good feel”—the term coined by the band to articulate the sonics of feedtime. Allen chose bass duties, Rick opted for electric slide guitar. Both chose motorcycles.

Dave handled drums until 1981, though very real threats of violence from irate punters (who expected to hear tame barroom fare) saw him split with the band. Allen’s sister Nella filled the drum stool until around 1982, eventually she also left the band due to the hostile atmosphere within the Sydney underground rock scene.

Tom was already playing in several bands in Sydney in the early 1980s and knew feedtime through friends. He’d seen them live a few times and was duly impressed. An all-round musician, he joined feedtime on drums in 1982. The band’s classic line-up was complete and three years of relentless live performance and rehearsal began. Early set-lists consisted of originals which would appear on their first two albums and covers of songs by X, The Rolling Stones and Flipper. Covers remained in the feedtime oeuvre with the band eventually releasing an LP of their favorite interpretations.

“You pay your respect to the stuff that got you going and you respect that stuff that keeps you going.” —feedtime, 1985

The sound of feedtime was like nothing else in Australia: a vintage blues swagger via roots rock and the late ‘70s that didn’t come from an established clique, a pure strain of rock and roll with a relentless mechanical propulsion. It was the perfect symbiosis of syncopation, minimalist rock that carried a thunderous atmosphere of reckless intoxication and intense personal pain but with a self-assured “ease” amongst the chaos. The sound was both Zen-like transcendence and a form of self-defense from psychic scum. Impenetrable, yet welcoming. Guitar noise you could dance to with lyrics cut straight from experience, tradition and dead crazy urban confusion. Repeating in cycles over and over and over again.

In 1985, feedtime recorded their debut album at Mary St. Studios with Jonathan Summers. Self-titled and self-released, the first feedtime album collected most of the band’s early songs and a cover of “I Wonder What’s the Matter with Papa’s Little Angel Child?” originally by Mississippi Fred McDowell. Allen screen-printed 500 covers and hand-stamped the inner sleeves. Two tracks from these sessions appeared on the Why March When You Can Riot?! compilation LP (Aberrant Records, 1985). Those songs, “don’t tell me” and “small talk,” were rerecorded and released as a 7” single in 1987. Bruce Griffiths was impressed with feedtime very early on and they quickly became the flagship band of his label, Aberrant Records.

“I first saw them at the Royal Oak Hotel, Parramatta, sometime in 1982. I remember they reminded me of Wire—not derivative, just similarly unique, minimal, and great. They were a true word-of-mouth phenomenon. Live, they’d blow two people away, and the next time they played, those two people would be there with four friends, and so it built.” -Bruce

The second feedtime LP was released in 1987, again recorded by Jonathan Summers. shovel carried the themes and atmospherics of the band to an international audience, with Rough Trade releasing the album in the US and Megadisc in Europe. Still, the band remained an underground phenomenon in Australia.

“They were largely unknown and the ‘necessary’ people, in terms of being pushed, didn’t know them. They didn’t come with ‘cool’ attached, just incredible integrity and rawness. And that probably scared—or at least put-off—the ‘necessary’ people. That, plus the band’s justifiable and hard-line refusal to kowtow and suck up to the clueless promoters, trend-following editors and UK-music-mag-worshipping radio programmers of the day kept them off the radar. Ultimately those people weren’t ‘necessary,’ a revelation they [the music press and radio], no doubt, would not have been comfortable with. feedtime did it on their own terms alone.” -Bruce

A split single with label-mates King Snake Roost appeared in 1987, before the aforementioned covers LP, Cooper-S in 1988. The Beach Boys, The Rolling Stones, Lee Hazlewood, The Stooges, Slade, blues traditional “Pure Religion,” an E.E. Cummings poem, a brooding version of The Easybeats’ “Sad, Lonely & Blue,” and an intense reworking of The Animals’ “We’ve Gotta Get Out of This Place” all hammered into shape for maximum impact. The album showcased the band’s classic roots and saw Nella return to contribute slide guitar.

“feedtime doesn’t have perfect pitch all the time, but neither does baseball, so I figure we’re in plenty of company.” -Rick

The fourth LP suction was released in 1989, with Rough Trade and Megadisc again handling the US and European releases respectively and Vinyl Solution licensing the album for the UK. Butch Vig mixed the album and gave an immeasurable clarity to the ballast. The cacophony and incendiary intensity of earlier material was still present, though suction showed a broadening of the band’s sound. New ideas were seeping into the song structures. Tracks such as ‘pumping a line’ evidenced the band in full flight and perfectly captured the minimal essence of feedtime, a rhythmic convergence of three players who had crafted their sound through the intuition you can only learn through years of repetition. Roots blues was also at the fore, with Dominic and Peter from The Backsliders providing steel-guitar and vocals on “i’ll be rested,” the traditional influences converging seamlessly with the new terrain that feedtime was navigating.

A US tour was being fine-tuned for mid-1989 and international fervor was at its peak, though the undercurrent of mental strain was about to implode for Rick and Allen. suction would be the final feedtime album with this classic line-up and the tour was cancelled.

“I got to the point where I would either kill myself or commit murder.” —Rick (Blunt: A Biased History of Australian Rock, 2001)
“We just felt that we weren’t going to be at full potential as a band [had we toured].” -Allen

And just like that, feedtime was no more.
feedtime have an almost subterranean legacy and those who like the band, LOVE the band and find a psychic link with this music. A ravaged beauty and soul underscore the claustrophobia of the lyrics, and the name itself is almost Zen-like: are you consuming your time or giving it over to something else? Time is given form and force through sound. There is always a road somewhere and if you gotta ride, get going and don’t be afraid. Trust your instincts and don’t mistake enthusiasm for lack of cool. There’s a screaming madness in the dissonance, but it’s got a benevolent message: “Buddy, it’s a sad ol’ life… But you get through it with love, your friends and family, as stress-free as you can make it… Or sit on your arse all day.”

This burning energy existed for some ten years and produced some of the most powerful, creative and personal rock and roll music we are ever likely to hear. The songs are out there to discover and relate to and when they hit they explode and you’re never the same again, but you’re grateful for the experience. This isn’t “noise rock,” this is a groundbreaking FORM of music that knows its roots but applies the lessons to a wider scope than their peers.

It’s heavy but life is too and some of us know this and we channel that power into art and sometimes beautiful things are created. Sometimes it’s too heavy and nothing seems to work out. Sometimes you just need to laugh it off and stand at the back of the room for a while.

This is perfect sound and pure art. Avant-garde pub-rock. All hail the concrete urban blues. 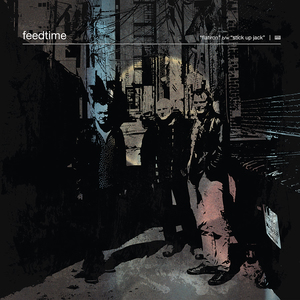