Feel yourself going inward. You’re a piece of hot chocolate, sinking through the marshmallow of yourself. Cutting through everything, into a warm hugzone.

Let Eugene Mirman’s new album I’m Sorry (You’re Welcome) center you with “A Guided Meditation for the Thoughtful Body,” teach you conversational Russian, and soundtrack your next intimate getaway with “Fuckscape.” Or just listen to him crying for 45 minutes.

The monumental 9-volume/7-LP set, due October 30th on Sub Pop Records, is much more than a comedy album, and much less than the 100 CD-album that Mirman originally conceived for the project 10 years ago. In addition to Mirman’s brilliant stand-up performance at Seattle’s Columbia City Theater in June 2014, the collection includes more than 500 tracks featuring: a guided meditation for various body parts; an erotic new age “Fuckscape” for sexing to; a comprehensive sound effects library, voiced by Mirman, including everything from “rain” to “zoo with nothing to lose”; an aural pharmacy of “digital drugs” from marijuana to apple cider vinegar; over 45 real minutes of real crying; an introduction to possibly useful Russian phrases; ringtones and outgoing voicemail messages for your personal use; and 195 consecutive orgasms. It is, as comedian Daniel Kitson writes in the set’s liner notes, “a parade of excellence punctuated with benevolent explosions of the purist, uncut, nonsense.”

“I’ve wanted to make this album for a long time,” says Mirman, best known for his roles on Bob’s Burgers, Flight of the Conchords, Delocated, and for the annual Eugene Mirman Comedy Festival in Brooklyn, NY. He brainstormed dozens of ideas for discs, including some that sounded funnier than they turned out to be in execution (“you quickly run out of secrets to whisper to your dick,” for example). “Since so much of what I wanted to do seemed sort of simple, I bought a moderately good podcasting microphone and actually recorded myself crying for 45 minutes on a sun porch in Cape Cod. A lot of people ask me if the crying is looped, which it is not. I cried for 45 minutes.”

Mirman quickly realized, however, that he needed professional help, and enlisted musicians and longtime friends Christian Cundari and Matthew Savage to record and engineer the album in their Boston studio. “What began as an inquiry, turned into a long, amazing collaboration,” says Mirman. “For the next few years, I’d take the train up to Boston and we’d record, drink, eat authentic Chinese food, record more and edit.”

Conceiving and editing hundreds of sound effects, ringtones, and orgasms was hard work, but also a lot of fun, and highly improvised.

“‘Fuckscape’ came from the fact that there’s a 24-hour soundscape in the elevator at the hotel that I would often stay at when I’d go to Boston to work on this, and I made some joke like ‘I’m going to make a soundscape for fucking,’” says Mirman. “A lot of it was just trying to make friends in the other room who were listening to me record this thing laugh. It’s definitely pretty funny to say that an album features 195 orgasms. I don’t know that I want people to listen to them, and there’s people I definitely want to not be aware that I’ve done this, but I do think it’s funny.”

Despite its conception as a multi-CD set, I’m Sorry (You’re Welcome) will be available only in digital and vinyl formats. And embedded in a limited run of collectible chairs and robes.

“One of the things that I’d originally told [Sub Pop A&R head] Tony Kiewel was that I wanted it to come out in all sorts of formats, and by that I meant a chair, a robe, and other objects,” says Mirman. “Basically, in today’s music industry, it makes sense to have it be a chair but not a CD.”

The first LP, the stand-up album itself, features Mirman’s signature sharp, absurd commentary including “The Time I Was Mugged In Mexico With Michael Stipe” and “Not Happy About A Parking Ticket I Got In Portsmouth, NH,” destined to become a classic for repeated listening.

As for what to do with the rest of it, the possibilities are infinite. “If you make a mix you should throw in 10 orgasms or sound effects, and I think you’d be surprised how fun that would be,” says Mirman. “I think it’ll be a spice that people add throughout their lives.”

To quote one of many discarded titles for the album, please enjoy this dumb, weird thing.

Flight of The Conchords Announce Support Acts For Summer Tour 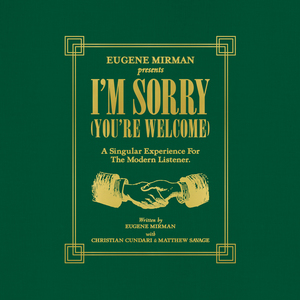