WHERE NOW:
Eric has been guest starring on acts such as “Tahiti 80”, “IVY”, “Spookey
Ruben”, “James Angell”, and Japanese pop sensation “Chocolat”.
Growing credits as a side-man have Eric back at making his own record and
hopes to have a new CD in the shops this fall.
EM fans lookout for the next “Garland Appeal Music Series” CD.
It’s a compilation of indie artists gathered together as a benefit for
breast cancer.

HOW FORMED:
After attending a conservatory in San Francisco, Matthews moved to Boston, where he collaborated with Lou Barlow from Sebadoh on a 1993 EP entitled “Belt Buckle.” For his next project, Matthews worked with Australian singer-songwriter Richard Davies, formerly of the Moles. In 1994, the duo released a critically acclaimed single, “Cardinal,” before breaking up due to artistic differences. Matthews released his first solo album on Sub Pop the following year, an ornate guitar pop album called “It’s Heavy In Here.”

HIGHLIGHT:
Meeting Spookey Ruben at the Sub Pop 8th anniversary party. TVT flew
Spookey to Seattle for an opportunity to meet Eric and he did. Fast
friends and collaborators to this day.
Also, his long hours in the studio with the great Jason Falkner while
making “Heavy” and “Lateness”.

“In this era of non-stop sensory assaults, a little beautiful music couldn’t be more welcome…Davies and Matthews are the most inventive of the symphonmaniacs…They make arrangements strong enough to make George Martin blush.” – Jim Derogatis, Rolling Stone

“Matthews’ careful focus on the craft of songwriting is critical to his recordings’ success.” – CMJ Music Monthly

“Polished pop perfection; the arrangements are sophisticated, the songs themselves are simple and catchy at their core.” – CMJ review of “It’s Heavy in Here” 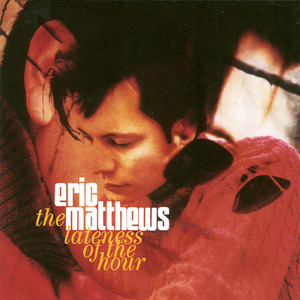 The Lateness Of The Hour