The Air Conditioned Nightmare is the name of the new album by Doldrums.

The title was spawned by Henry Miller upon his return to the US after ten years as an expatriate. Keen to rediscover the country he left behind, Miller found it a stifling place of big business, pollution, credit, misinformation and prejudice. In short: a spiritual, moral, cultural and aesthetic vacuum. “Nowhere else in the world,” he wrote in his 1945 collection of essays “is the divorce between man and nature so complete”.  The Air Conditioned Nightmare.

Seventy years on and the book lends itself to the title of the anticipated second album by Doldrums, the band lead by 25 year old musician Airick Woodhead. On the follow-up to the 2013 debut Lesser Evil, the DJ, producer and performer makes a sizeable leap from being darling of the same fertile Montreal warehouse creative explosion that gave the world the likes of Grimes, Majical Cloudz, Blue Hawaii to simply being a stand-alone artist and composer on the cusp of something quite special.

Doldrums craft musical montages, paint sonic pictures from a new palette, construct sounds using Airick’s own unique architectural blueprint. They apply a punk rock ethos to electronic music, creating songs using samplers and DJ gear in place of guitars. Bold, anxious, dream-like, uplifting, glacial, hypnotic, constricting, expansive, alien - this is an album that is ever-changing. “Conflict is at the heart of this album,” explains Airick. “There’s a lot of paranoid sentiment and Dystopian imagery in there. The threat of a mundane reality ties it together, as does an obsession with plasticity. Songs come from specific feelings or images. Anxiety is my default state.”

It is a forward-facing collection born out of endless touring of the States. “By coincidence I ended up taking the exact same route Miller took in The Air Conditioned Nightmare and found that much still applied today – like how New Orleans feels like the last vestige of magic in America, or how Vegas remains the ultimate gesture of it’s desperation. As a Canadian I’m part of that American culture, yet I’m an outsider too. It’s double-faced.”

The staccato, juddering rhythms and bass growl of opener ‘HOTFOOT’ finds Doldrums at their most confrontational yet melodic – this is the offspring of Nine Inch Nails/The Prodigy re-born in a warehouse and fed new narcotics. Meanwhile, ‘Funeral For Lightning’ recalls the pulsebeats and synth flourishes of 70s pioneers such as Neu! and Goblin. Or consider the snatched 49 seconds of ‘iDeath’ (whose title references another counter-cultural literary hero, Richard Brautigan), the haunted tones of ‘Video Hostage’ and the elegiac and ethereal closer ‘Closer 2 U’, a song that takes the ambiance of My Bloody Valentine or early Verve into a bold new future.

The Air Conditioned Nightmare is an album of texture and taste, an extra-sensory overload.  Weaving through the mix are Woodhead’s own androgynous, tweaked vocals singing snatches of lyrics like voices down broken phone-lines. Newly- signed to Sub Pop, currently home to - amongst others - the weird and wonderful likes of Mogwai, Goat, Shabazz Palaces as well as being, yes, the label that reshaped modern rock music via the likes of Nirvana et al, Doldrums occupy their own sonic sphere. This is music born of the 21st century.

Airick Woodhead’s early career was a time of travel and exploration – both geographically and auditory. First forming a band at thirteen, he later progressed to production. Back then he lived in a communal jam-space called The Torn Curtain inhabited by noise musicians , his earliest sets combining what one magazine noted was “mangled gabba and bottom of the pan crusty dance music”. Rent was paid for with bi-weekly in-house shows: “That’s the economy of my people,” he laughs.

Doldrums’ rudimentary solo recordings presented a glorious pile-up of incongruous samples (Bollywood soundtrack, 60s girl groups, dial-up modems, waves of static and feedback), and Doldrums’ debut Lesser Evil was a world of warped vocals and often woozy backdrops that took listeners to new places. It was electronic music contorted and stretched into new shapes, truly the epitome of contemporary music created in the outlying hinterlands of modern technology – that space where head and heart collide.

Evolving into a full live band, extensive touring followed alongside kindred spirits such as Unknown Mortal Orchestra, Crystal Castles, Grimes and Purity Ring. “I’ve always liked Frank Zappa’s idea of performance as chaos,” says Airick. “The idea of something unique happening in each show is what we strive for.” There were a clutch of remixes too, for the likes of Peaking Lights, Grimes & Portishead.

But Lesser Evil was nevertheless an album recorded on a Macbook that had a cracked and glitched-out screen - a perfect example, perhaps, of the medium being representative of the message itself. In its wake comes The Air Conditioned Nightmare. It’s an album that is punk rock in its DIY beginnings and militant commitment to originality. Doldrums’ is a self-contained world, in the same way that Portishead and  Wu Tang Clan defined their own universe of sound. Ten snatched seconds is enough to pull you in.

Doldrums have created something special.

You need to hear them. 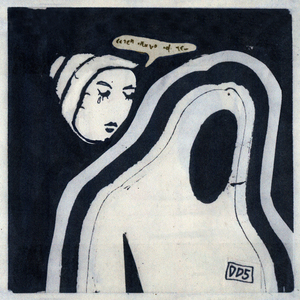