From its foundation as a Puritan colony in 1630, to the ban on William S. Burroughs’ groundbreaking The Naked Lunch during the free-wheeling ‘60s, Boston has a long, proud tradition of suppressing freedom of expression. Yet it has also nurtured some of our nation’s most provocative individuals: Donna Summer, the Pixies, Edgar Allen Poe, Ralph Waldo Emerson.

Guess which side of that cultural divide David Cross falls on?

It was here in Massachusetts’ capital city that our hero dropped out of college after the longest semester of his young life. Here that he first forged his career in the white-hot crucible of the late ’80s comedy scene, with exactly the sort of smart, thought-provoking remarks that could have once landed a man in the stockades. And here that he returned, after years in the wildernesses of Los Angeles and New York, to record the performances documented on Bigger and Blackerer.

Five years had passed since Cross’ last national trek. Originally, he’d intended his return to the live stage to coincide with a promotional tour for his 2009 book I Drink for a Reason. But, while the book was published (“One of the funniest books I’ve ever skimmed!”—Paul Rudd), this promotional tour never materialized. Undeterred, Cross took bits of new material he’d been refining at benefits, festivals, and family potlucks, and stitched them into an evening’s worth of entertainment. For the first time, Cross played mostly big houses—“theaters,” as they say in legit circles. Mercifully, plush seats or no, the venues still poured their drinks with a heavy hand.

Bigger and Blackerer was taped during two such shows, back-to-back on the same evening at Boston’s Wilbur Theatre. As you may have surmised from the packaging, this title applies to both a CD and a DVD. These are separate releases in separate formats with the same name. Some of the material contained on the Bigger and Blackerer DVD will air as a television special on the cable channel Epix on April 10th. And, yes, there is some overlap between the CD and the DVD, but not a lot. Though both media are housed on a shiny, silver five-inch disc, each is an entity unto itself, full of material that appears solely on one or the other. Only by watching the DVD will you learn of Cross’ unique relationship with the deaf community, share his canny insights into the editorial machinations behind the Bible, and marvel at how well a bald, middle-aged white guy can fill out a pair of jeans. Yet one must listen to the CD in order to hear about gastro-intestinal misadventures with his dog Ollie Red Sox, or sing along with “The Sultan’s Revenge,” the swinging, Vegas-style opening number composed by Cross and his good friend Mark Rivers (author of the theme to Mr. Show).

During his illustrious career, David Cross has played recurring roles on the TV programs Arrested Development and The Colbert Report, and won an Emmy Award for his contributions to The Ben Stiller Show. He has also starred in such films as Waiting for Guffman, Eternal Sunshine of the Spotless Mind, the Bob Dylan fantasy I’m Not There (in which he portrayed Allen Ginsberg), and Kung Fu Panda. As a teenager, Cross was a state champion swimmer. He has also won numerous design awards for his hand-drawn typefaces, including the popular fonts Alabama Bitch Slap and Emaciated Geisha. He is currently living in exile in the UK, working on the show The Increasingly Poor Decisions of Todd Margaret (to be broadcast on IFC in the USA this fall).

Bigger and Blackerer is both David Cross’ third album and second DVD on Sub Pop Records, preceded by the albums It’s Not Funny (2004) and Shut Up, You Fucking Baby! (2002), and the 2003 DVD tour documentary Let America Laugh. The first album was actually nominated for a Grammy Award, although the voters ultimately decided it was not the Best Spoken Word Album for Children after all. Cross was also the first comedian signed to Sub Pop, paving the way for Eugene Mirman, Patton Oswalt, Flight of the Conchords, and dozens of other hopeful comics in flannel shirts and ripped jeans. In that respect at least, David Cross should be regarded as a pillar of his community—wherever he may be. 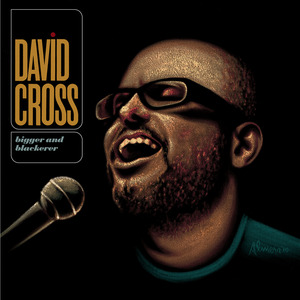