Ethan Miller and Ben Flashman formed Comets on Fire just prior to the turn of the century in the drug-infested hippie town of Santa Cruz, California. Their original intent was to create a rock group free of commercial pretensions or genre trend; one that simply dealt in pure bombast, attack, overwhelming distortion and chaos, and yet possessing a shameless love for anthemic choruses, shattering hooks and riffs, and the smoke and magic of yesteryears’ rock and roll iconoclasts. They now number five members, and live and work in San Francisco and Oakland, but have retained their original directive.

Blue Cathedral was the third album from Comets on Fire and their first for Sub Pop. It is also the Bay area band’s most varied and richly textured album yet. With their first two albums, (2001’s self-released, eponymous debut (recently re-released on Alternative Tentacles) and 2002’s Field Recordings from the Sun on Ba Da Bing!) they established themselves as flag-bearers of modern psychedelia. Their trademark sound is here enriched by more structured, keyboard-driven jams, churning Blue Oyster Cult-ish chooglers and slow burners reminiscent of Harvest-era Pink Floyd.
Comets’ core of Ethan Miller (guitar, vox), Noel Harmonson (savage analog electronicist and vocal echoplex player), Ben Flashman (bass) and Utrillo Belcher (drums) has been augmented in an official capacity by one Ben Chasny (otherwise known as Six Organs of Admittance) on second guitar. Mr. Chasny (equal parts madman and genius folk hero) collaborated with Comets on Field Recordings, but this time out they make it official. Though their national tours are infrequent, their live shows are already becoming the stuff of legend. They recently opened a string of dates for Sonic Youth and have also played shows with Rocket from the Tombs, Dead Meadow AND Dead Moon, Sunburned Hand of the Man, Kinski and more. They also made a BIG fan outta Lord Head on High, Julian Cope, who said of them: “Comets on Fire deserve our gratitudeâ€¦for their distillation of all the best rock riffs since High Rise’s take on Blue Cheer” Naturally, we agree. For more of Mr. Cope’s thoughts on Comets on Fire, kindly rotate this page 180° on its Y-axis. 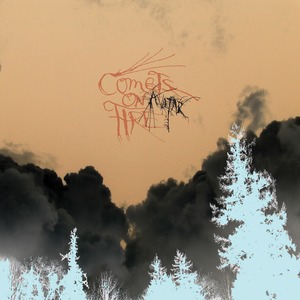