Chixdiggit! is a pop punk band formed in Calgary, Alberta, Canada. The idea of the band was conceived by three high-school students in 1990 when they started making band t-shirts for the as of yet fictitious band. According to the band the name Chixdiggit! is “the Heavy Metal way of writing ‘Chicks Dig It’”. The band released their debut self-titled, full-length in 1996. Their latest CD was released in 2005, titled Pink Razors. The band has a reputation for writing often light-hearted pop songs, usually about girls and relationships.

The band was started after K.J. Jansen, Mark O’Flaherty and Mike Eggermont started selling Chixdiggit! T-shirts at their high-school, although at this stage the band did not officially exist. Eventually the shirts started selling well, which provided the band with enough money to purchase a drum kit. However none of the band members had any musical experience nor did any of the members own instruments (except Mark who owned a classical guitar). Mike took up playing Bass and because “KJ couldn’t sit still long enough to be drummer” he took up playing guitar as well as becoming the lead vocalist for the band. The band in its early stages went through many drummers, however, Jason Hirsh is currently the drummer for the band.

In 1996 Chixdiggit! were signed to Sub Pop records. They released their first self-titled album on the record label, however they only lasted a short time on the label. The band left the label as they felt as though they didn’t fit in with the record label’s ideals. As stated by Mike from the band: “the people that actually had to sell our records and deal with us on a day to day basis were not quite so fond of us”.

At this stage Chixdiggit! was touring worldwide.

Founding member Mike Eggermont left the band in 2002 and started a software company.

The most current Chixdiggit! updates can be found @ Wikipedia. This article is licensed under the GNU Free Documentation License. It uses material from the Wikipedia article ‘Chixdiggit!’ 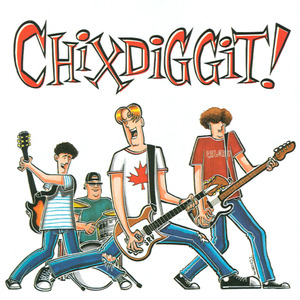